Will Vamsi’s Behaviour Towards Vasundhara Change In The Cottage?

In Maate Mantramu, we see that the lead couple is stuck with each other thanks to lack of network connectivity. What will this lead to? 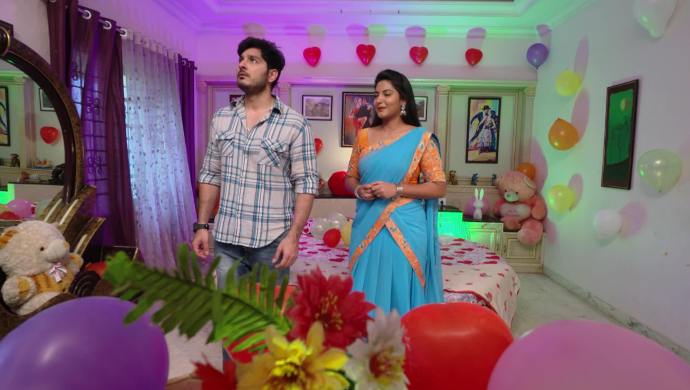 If you have been following actor Pallavi Ramisetty’s character Vasundhara’s struggle in keeping up with Vamsi (Played by Ali Reza) and trying to knock some sense and politeness in him, then you would know that the struggle in the Telugu TV show Maate Mantramu is too real. After accidentally putting a ring on Vasundhara’s finger, instead of Nakshatra’s (played by Tulasi Yerra), we really have been waiting for the time when this accident becomes a beautiful reality. But our wait seems to be long and painful. In the recent episodes, we saw that Vamsi and Vasundhara are stuck in a cottage which is in the middle of nowhere. Here’s what happens next between the two of them:

Previously, Vamsi had unknowingly saved Vasundhara from Jogendra who tried to kidnap her once again. Vamsi’s plan was to ditch Nakshatra, get rid of Vasundhara and enjoy a few days in solitude at this cottage. But little did he know that Vasundhara was just behind him, literally. She lay there, unconscious, in the trunk of his car. When Vamsi found out about it, he was angry and annoyed, as expected. He tried to call for a cab that would take her away. With no network in the woods, fate worked its magic.

Now that they’re stuck in the same cottage, without anyone around to disturb them, will Vamsi’s behaviour towards Vasundhara change? Other than thinking and questioning his feelings for her, will he do something other than throwing tantrums at Vasundhara? We’re really hoping he does. After all, Vasundhara has always kept her promise of never leaving him alone. Coincidence? We don’t think so. Let us know what you think will happen in the next few days between them?

Until then, tune into ZEE5 and check out the latest episodes of the hit show Muddha Mandaram, before TV.

Kalyana Vaibhogam 28 May 2019 Preview: Nithya Confronts Manga In Front Of Jai And Chary

4 Videos From Maate Mantramu's Nakshatra That Prove She Loves Drama