In Ninne Pelladatha, Will Mrudula Reveal The Truth About Her Pregnancy?

While we are sure she will inform Madhu, will she tell the rest of the family? Will she find out Brahmini was behind it all? 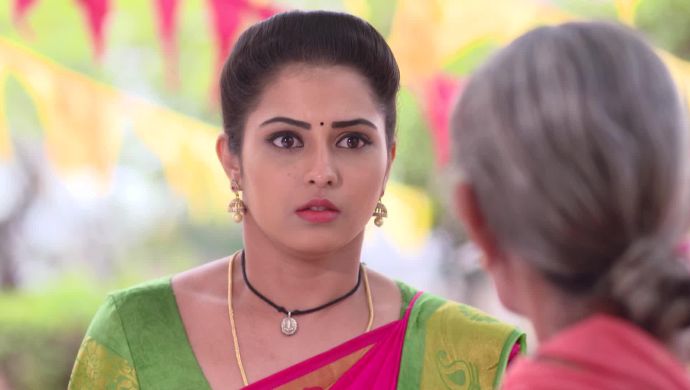 In the Telugu TV show Ninne Pelladatha, Mrudula (played by Madhubala) came back from the dead when Sarayu (played by Sarayu Roy) tried to kill her in a car accident. Thanks to the ashramam which saved her from the burning car and treated her until she got well. Madhu (played by Abhi Prathap), who was firm about Mrudula being alive, sensed her around him. Finally, the two love birds united in a temple. By then, Brahmini had already planted her next plot. Madhu kept his distance from Mrudula due to the pregnancy reports. Watch what happens next in the Telugu serial, here:

In the episode that aired on June 6, 2019, we saw that Mrudula’s mother Vasanta gave her a glass of milk and asked her to drink it despite Mrudula not wanting to. But she listened to her mother and did as she was told. A few moments later, we saw that Mrudula starts puking while climbing down the stairs. Her personal nurse informed that such a thing could happen only if she ate or drank something to abort her pregnancy. While everyone questions Sarayu, Vasanta confesses to the crime. Heartbroken and concerned, Mrudula asks Madhu to take her to the temple.

Mrudula cries her heart out and asks the goddess why she is being put to test so often and so brutally. That’s when three ladies come to the same place and cry about aborting a baby by force. Mrudula confirms with the oldest lady if pasarlu (the juice of a certain toxic leaf) is really abort a pregnancy. She responds positively and checks Mrudula. After taking a look at her eyes and hands, the old lady confirms that Mrudula was never pregnant.

Mrudula will surely share the news with Madhu. But will she announce the good news to everyone else in the family? Will Mrudula know that Brahmini is the reason behind it all? Watch the latest episode to know what happens next.

Until then, check out Maate Mantramu on ZEE5.