Will Mansi Exchange Rings Calmly On The Engagement Day?

Brahmini, Mansi and Sarayu do have a plan to ruin the engagement. But Tarun is keen on knowing the truth. What lies ahead in Ninne Pelladatha? 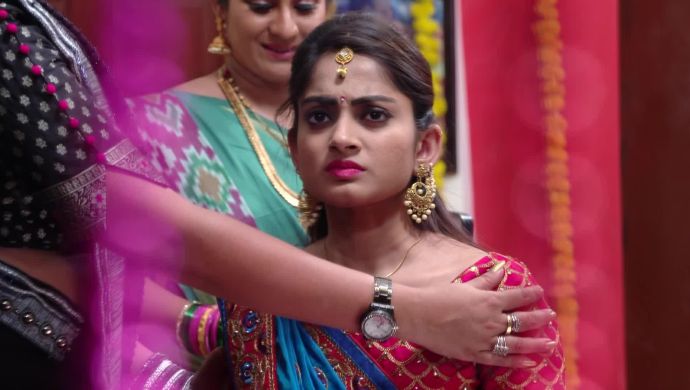 The Kamineni family, in the Telugu serial Ninne Pelladatha, is on their toes watching out for every possible obstacle. Mansi’s (played by Sree Priya) engagement is just around the corner, and preparations are going on in full swing. But little do they know that Brahmini is hatching a master plan for the engagement day. With the help of her two disciples — Mansi and Sarayu (played by Sarayu Roy), Brahmini intends to ruin the day for everyone. Although she has been seemingly encouraging the marriage of Mansi with her fiance-to-be, her plans are to actually stop their wedding. With only one day until the engagement, what will happen next?

In the episode that aired on  July 17, 2019, we saw that Mrudula (played by Madhubala) has started dealing with Sarayu the way she deserves to be dealt with. Mrudula has started showing Sarayu her place. While we are reeling in joy seeing her changed behaviour, Sarayu is actually afraid to see this side of Mrudula. Now, Mrudula continues to take all of Mansi’s heat and hatred without any resistance. But as the engagement day approaches, will she be able to find out Brahmini’s plans?

Brahmini has been confident about her plans this time. But first, faking Mrudula’s pregnancy reports and then keeping her away from her husband should be good enough hints for Mrudula to start smelling a rat. Madhu has been unaware of his mother being the person behind maligning Mrudula’s image. Will he be able to understand the bigger motives of his mother before the engagement day? It seems highly unlikely, given the immense love and respect he has for her.

Tarun seems to be on a high alert ever since Mrudula returned from the killer car accident. Mansi and Sarayu have been his constant target, rightfully. But they have managed to escape so far. Now, will he find out about their evil plans before it’s time? We really hope so.

Stay tuned to find out what happens next. Until then check out the latest episodes of Meenakshi on ZEE5.

Take A Trip Down The Memory Lane As You Binge-Watch The ZEE5 Original Series B.Tech, Streaming Now