Will Doing The College Play Make Soundarya And Abhi Fall In Love?

In Muddha Mandaram, the characters of Pavan Sae and Thanuja Gowda are supposed to act together. Will the drama bring them together as a couple? 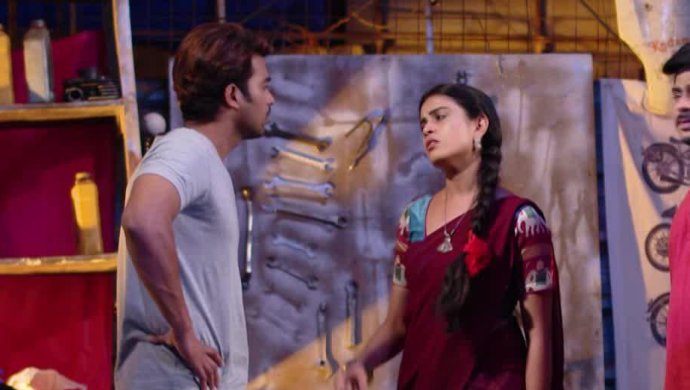 Deva and Parvathi  (played by Pavan Sae and Thanuja Gowda), of the Telugu TV show Muddha Mandaram, barely took time to fall in love. Everything since then was a beautiful, romantic journey. But ever since the generational leap in the Telugu serial, their reincarnations Abhinandan (Abhi) and Soundarya have been doing one thing with a lot of dedication — and that’s fighting. Despite developing feelings for each other, they refuse to acknowledge it. Neither Soundarya nor Abhi have taken any step towards mending things. But something is coming up, and we think this may ring in a brand new chapter. Check out what happened in the last episode here:

In the last episode, aired on June 3, 2019, we see that the principal of the college appoints Abhi to play the role of Pravarakhya in the play Varudhini Pravarakhaya. Later, the principal asks Soundarya if she would be interested in extra-curricular activities, but Soundarya refuses. She thinks that the principal had called her to rusticate her from college due to her constant fights. But when he offers to clear all her backlogs for the performance as Varudhini, Soundarya agrees. At night, Soundarya tries to talk to Abhi about the collective performances as the leads in the play.

But things don’t go according to her liking, First, Abhi refuses to answer her calls. Then just to annoy her, he tells her that he has already found his Varudhini and is practising with her. Just as he wanted, Soundarya comes to his garage shed along with Chandrika. Knowing Soundarya’s exact moves, Abhi gets Surya to wear a saree and rehearse the dialogues with him. He sees Soundarya peeping from a corner and hugs Surya, who is in a saree. Soundarya loses her calm and takes a rod to hit the anonymous girl in Abhi’s arms. When Surya tells her to stop, Abhi and Soundarya start fighting.

Surya tells Chandrika that maybe this play will bring them closer. And that’s exactly what we think, too. While playing the characters of Varudhini and Pravarakhya, Soundarya and Abhi will have to be sweeter to each other. And that’s when they will start acknowledging their feelings. We really hope that by the end of the play, Abhi and Soundarya accept their love and we get to relive the Deva and Parvathi days.

If you are in the mood for some drama, watch the latest episodes of Kalyana Vaibhogam on ZEE5.