Will Bharati Write Off The Kamineni Wealth To Sarayu On Komali’s Demand?

With her son's wedding at stake, what will Sheela Singh's character, Bharati, do in Ninne Pelladatha? We are hoping to get the answer today. 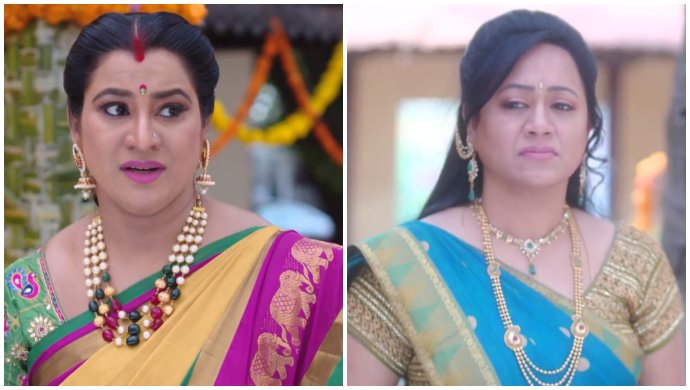 The Telugu show Ninne Pelladatha has been keeping us on the hook with its recent developments. The show mainly revolves around Mrudula (Bhoomi Shetty), Madhu (Prathap Singh Shah) and Mansi (Sree Priya). Mrudula and Madhu elope and when they return home, they end up hurting the emotions of two families. Mansi is the most affected with this because her sister ended up marrying the man she herself had wanted to marry. And Mansi makes sure to express her disapproval and disappointment at every possible occasion.

Recently, in the show, Mrudula and Mansi’s brother Tarun and Madhu’s cousin sister Sarayu are to be married. With the hatred that Sarayu and Mansi share for Mrudula, they make multiple attempts at keeping her away from the ceremonies and the family. One of the things that Sarayu plans is to do is call a fake baba who comes and tells Mrudula that she is a curse to the family and if she stays at home the wedding will never succeed. Mrudula, wanting to save her brother’s wedding, decides to leave home for good.

All of it fails when the baba‘s true identity is revealed at a temple in front of Madhu. He brings her back home. Having been unsuccessful with everything, Sarayu’s mother, Komali, decides to ask Mrudula’s mother, Bharati, to transfer property and wealth belonging to each member of the Kamineni family to her daughter’s name before the wedding. Komali warns Bharati that she will ask her daughter to get up from the mandapam even seconds before the muhurtam.

Now, Bharati is in a fix. Neither can she ask her husband or son to agree on this matter nor can she try talking to Komali. Today, we will find the answer to many questions. Will Bharati manage to convince the men in her family to surrender all the wealth to their daughter-in-law-to-be? Or will she do something else?

Love family dramas? Stay up to date with what’s happening in the Ghatammaneni family in Muddha Mandaram on ZEE5.

What Will Nithya Do Now That Jai And Manga Have Become One?