What Next For Nithya Now That She Knows That Manga Is Actually Pregnant?

Now that Manga is pregnant in Kalyana Vaibhogam, Nithya has fallen another step backwards. What could be next on her list? Read more here. 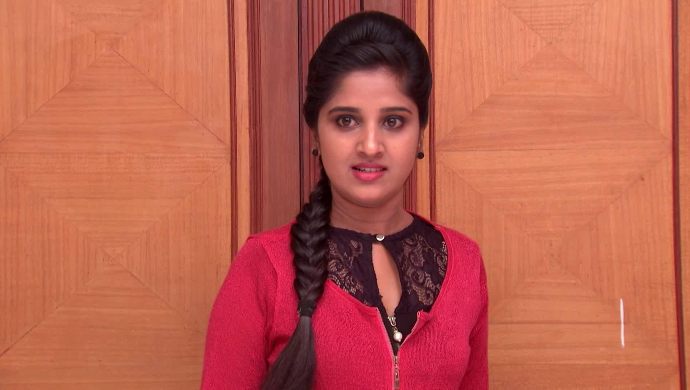 In the last episode of the Telugu TV show Kalyana Vaibhogam, we saw that Manga (played by Meghana Lokesh) started vomiting soon after dinner time. By then, everyone had gone back to their rooms and Jai (played by VJ Sunny) was busy bantering with his secretary Chary. Jai asked Chary to read his palms and predict his future since Chary also happens to be a pandit. Chary read between the lines, did his calculations and predicted that good news is coming to him soon. Just as he said that, Jai heard Manga vomiting and yelled at Chary for his fake fortune-telling. After a lot of struggle, Jai understood what everyone was trying to tell him  – Manga is pregnant and he will be a father soon.

As expected a lot is about to happen with this newfound piece of information. For starters, Chandrika and Prasad did exactly what they were told to, for the first time without amiss. And that is – informing Nithya as soon as possible. In fact, before Manga could break the news to her mother, Tulasi, Nithya knew about it. Clearly, Manga has inched another step closer to Jai and Nithya has gone a few steps further away from her dream. The chances to hurt Manga in any way will now be tougher than ever before. Because Jai will run an army behind her if he senses any threat to Manga or their unborn child. But Nithya’s obsession will not let her stay calm or to withdraw from the madness. She… has a plan.

Nithya is done being the game master. This time, she plans on playing the victim. Her latest plan is to consume poison and shock everyone. However, she will not die and take an antidote on time, without anyone’s knowledge. She also plans on accepting her dirty behaviour and gaining sympathy. Once she has done that, that’s when her real game begins. Will she really do something so far-fetched? Let’s wait and watch.

Ninne Pelladatha: Take A Seat, These Scenes From 16 July 2019 Episode Will Shake You Up

Pandaga Chesko Jukebox: Tune In To These Ram-Rakul Songs And Get The Mood Going