Vamsi Comes To Vasundhara’s Rescue Once Again In Maate Mantramu!

By a sheer stroke of luck, he manages to save her from Jogendra's clutches. What's next for Pallavi Ramisetty's character now? 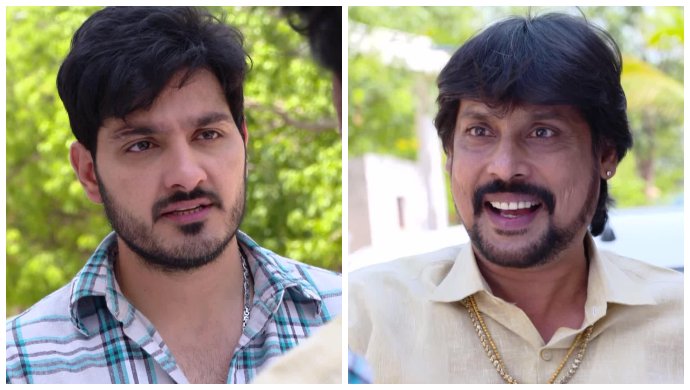 The fans of the Telugu serial Maate Mantramu are definitely being teased with tiny but lovely instances between Vasundhara and Vamsi, played by Pallavi Ramisetty and Ali Reza, respectively. Their romance was long awaited the wait just doesn’t seem to end. But slowly and steadily their distances and hatred have turned to friendly banter and attachment. All that’s left now is for Vamsi to accept his feelings for Vasundhara rather than trying to suppress them. The episode on 22 May 2019 has to be enough of a proof that they are truly meant for each other.

On May 21, 2019, we saw that Vasundhara’s lover, the sadistic Jogendra finds Vasundhara alone in a supermarket and kidnaps her. He covers her and himself in a burkha and leaves. Vamsi, who was just entering the supermarket right then, questions why one of the ladies in the burkha has her eyes closed. Jogendra smartly tackles the question by blaming the scorching heat. Later, he hides Vasundhara in the trunk of his car and moves to the driver’s seat. Just as he is about to start the car, he looks up, only to find Vamsi standing in front of him.

Looking at Vamsi’s angry face, Jogendra loses his calm. He is afraid of being caught for his crime and being beaten up by Vamsi, yet again! He steps out of the car and politely asks Vamsi what is wrong. To Jogendra’s and our surprise, Vamsi seems to be angry because according to him, Jogendra was trying to steal his car. Jogendra is relieved, but his ‘Vasu’ is still in the trunk of Vamsi’ car. He tries to beg and exchange cars with Vamsi which the Kakarla boy flatly refuses to do.

Guess what? Just like that Vamsi  manages to save Vasundhara from Jogendra’s clutches. But she is still in the boot of the car, lying unconscious. What will Vamsi do to save her? Keep watching this space to know.

In the meantime, check out the family drama Meenakshi on ZEE5.