Last week in Trinayani, Nayani finds out that her premonition of death was a threat of Subhadra's life. Read the full weekly update here. 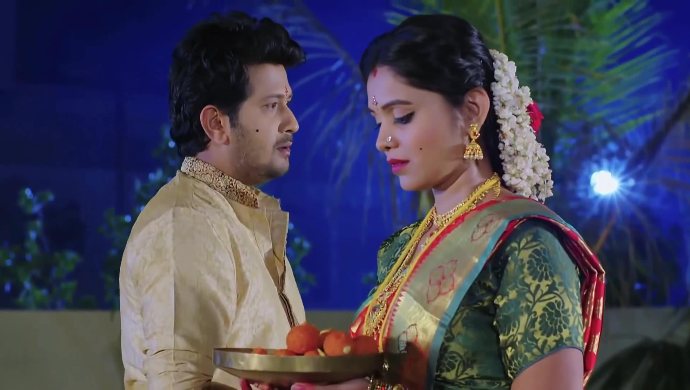 In the first week of Trinayani, Nayani foresees some danger at the rath where Vishal was scheduled to complete his pooja. Nayani crosses path with Vishal, and he becomes awestruck. Nayani finds a way to solve the problem at hand and leaves peacefully only to be scolded by her mother. Later, her grandfather asks her to leave the temple as other ladies of the village would not appreciate her presence. Vishal tries to enquire more about Nayani from Shiva, the parrot.

Nayani tells her mother about the premonition and decides to go to each of the six brides’ houses, against her mother’s will. She manages to see five brides, who weren’t wearing a red saree.

Nayani’s mother locks her inside a room, to avoid any further damage to Nayani and their family. But Nayani continues to beg her mother and find a way to get out and save her friend, Subhadra – the last bride.

Sumana agrees to let Nayani out of the house, on the condition that Nayani does or gives whatever asked for, by Sumana. Nayani promises to do it. Sumana tries to open the door. But their mother comes just in time.

Shashtri tells Nayani’s mother to let her go since she has to save her childhood best friend. But Nayani’s mother does not pay any heed to his words. Vishal comes to pick Shashtri up for the wedding. That’s when Nayani asks her grandfather to look at the saree’s colour and save her.

During the wedding, Sumana barges into the wedding because she wanted to witness a grand ceremony. There, she tries to gel-up with Hasini. But Kantam comes and kicks her out of the house. Sumana comes and tells Nayani a different story and confirms that Subhadra has a red saree.

Somehow, Nayani gets herself out of the house and Shiva suggests that they go to the dramatics leader and ask him for a costume change. This will help them in getting easy access into the house.

Nayani goes inside Subhadra’s house along with a bunch of kids to perform the Burra Katha. But Nayani sees her friend in danger and takes off her disguise to warn her. Once again, Kantam drags Nayani out of the house. That’s when Nayani decides to go and sit by the river bank, where Subhadra will be in danger.

In the meantime, Shashtri and Nayani’s mother finds out that Nayani is missing and go to search for her. Also, Subhadra meets her newlywed husband in the backyard of her house. That’s when he crashes her dreams by stating that their marriage is just a pretence since he loves another girl.

Nayani hears her folks calling out for her. So, she asks her the kids to go back home. Nayani takes a dip into the water and holds her breath to avoid to be spotted by anyone.

Watch the latest episodes of Trinayani on ZEE5, before it aires on TV. And check out all the updates of the show here.

Monday Motivation: Here's What Allu Arjun Does In A Day To Maintain His Admirable Physique