Trinayani Weekly Update 2 to 7 March 2020: Nayani Gets Heckled Out Of Every Place

Last week in Trinayani, Nayani gets kicked out of all the places, because people consider her to be evil. Read the full weekly update here. 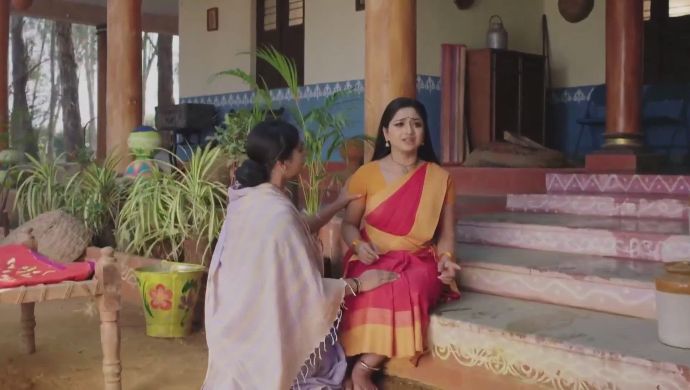 Trinayani is the story of a woman who sees the future and uses her prophecies to help people in bettering their lives. The protagonist, of the same name, also sees visions from the past. Although unsure of her abilities initially, Triyanani eventually learns the art of channelling her powers. With every solved problem, Trinayani’s fame begins to grow manifold. This show also happens to an adaptation of the Zee Bangla show titled Trinoyoni.

Shiva, the parrot, comes to Nayani who was fetching water from the nearby sea. He asks her for a fresh flower that their grandfather needs for the goddess’ Archana.

Tilottamma tells her second-husband, Jagadish, that she cannot deal with the thought of seeing their son, Vinay, in pain. Jagadish compliments for her being so sweet and motherly to Vinay, who happens to be her step-son.

Nayani comes home whilst having a vision. When her mother tries to bring her back to reality, Nayani tells her that there is going to be some mishap at the rath yatra. Despite her mother’s pleas, Nayani goes to save the day.

On her way to the rath, Nayani crosses path with Vijay who was getting ready to move the rath as a part of his pooja. Nayani drops her earring on the ground and Vijay picks it up.

Nayani tries to warn her grandfather, the Shashtri, who was leading Vijay’s pooja. But she is unable to reach him. She stands close to the rath and prays to the goddess to solve the problem or to show her a way to solve it.

Vinay successfully completes the pooja, without any hindrance because of Nayani and her prayers. However, when a random stranger dashes into Vijay, Tilottamma scolds him.

Vijay dreams of marrying the girl whose earring he keeps safe with him.

The next day, Shiva gives a few lessons about Nayani to Vijay. Shiva tells Vijay that anyone in the village may know about the problems later, but Nayani will be there beforehand to help them.

Later, Nayani goes to the temple and prays in solitude with the doors closed. Kantamma, Subhadra and other ladies gather outside and wonder why the Shashtri hadn’t opened the gates yet. But when the old man finds out about Nayani, he begs her to go away.

At Kantamma’s house, everyone thanks Vijay for the gifts that he had brought for them, from America. When they ask about his plans for moving back to the states, Vijay claims that the jhumki will decide his fate.

Nayani sees a red pattucheera in the sea and enquires about who owns it. Some clues drive Nayani back to her mother, who feels shocked to know what Nayani has to say.

Watch the latest episodes of Trinayani on ZEE5, before it aires on TV. And check out all the updates of the show here.