TREAT ALERT! Vamsi Wants To Control His Feelings For Vasundhara

Good news! Get ready because the love story is about to begin in Maate Mantramu. There's more to add to the happiness. Read to find out. 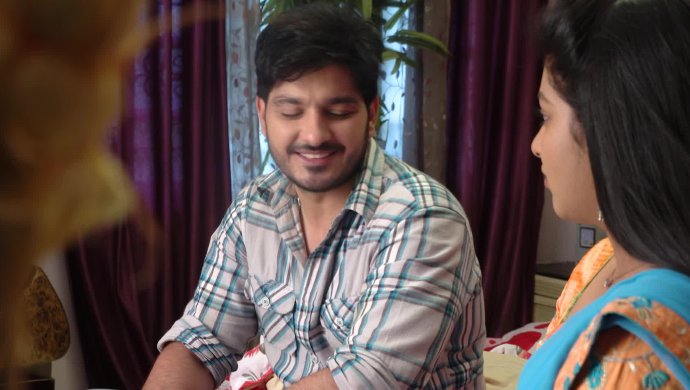 Let’s begin counting days because the good times are about to roll soon. Wondering what this is all about? Let us take you through the good news. Vamsi and Vasundhara (played by Ali Reza and Pallavi Ramisetty), are the lead characters of the Telugu TV show Maate Mantramu. Vamsi is the rich arrogant man who is looking for love and a lifetime of partnership with his childhood ‘heart friend’. Vasundhara is the simple girl-next-door, trying her best to keep Vamsi safe, healthy and sane. The girl realised her feelings for him and has been doing everything that’s in her control. Vamsi, on the other hand, is a tough nut to crack.

In the latest episode of Maate Mantramu, airing on June 4, 2019, we see that Vamsi and Vasundhara are still stuck in the same isolated cottage. They are woken up by the AI system ‘Chitti’ who wouldn’t shut up unless the couple wishes her ‘good morning’. Vasundhara complies, but Vamsi rebels until he cannot bear the sound of Chitti anymore. Chitti announces that the couple has won 200 bonus points. With more 800 bonus points they can win a surprise hamper. Vasundhara explains that just because he held her hand while sleeping, they won 200 points.

Vamsi tells Vasundhara to get away from him and Vasundhara responds by saying: “Now I will go and get ready. You won’t be able to take your eyes off me when I come back.” But Vamsi ignores this and goes back to bed. Just before he closes his eyes to doze off, he remembers that Vasundhara has moles on her tongue which means whatever she says can come true. He also recollects how despite trying to be angry at her, all his attempts to stay away from her are failing instantly. Vamsi tells himself: “I need to start controlling my feelings for her.”

At the Kakarla house, Ayirendri and Nakshatra try to kill Chitrasen by pushing him down the stairs. But they fail. The next morning, Chitrasen completes the sketch and tells Anand that this is the same sketch he drew before he had an accident. Anand sees who Vamsi’s ‘heart friend’ is and gives the good news to his mother, Suchitra Devi.

For more updates, stay tuned. And check out Ninne Pelladatha on ZEE5 in the meantime.