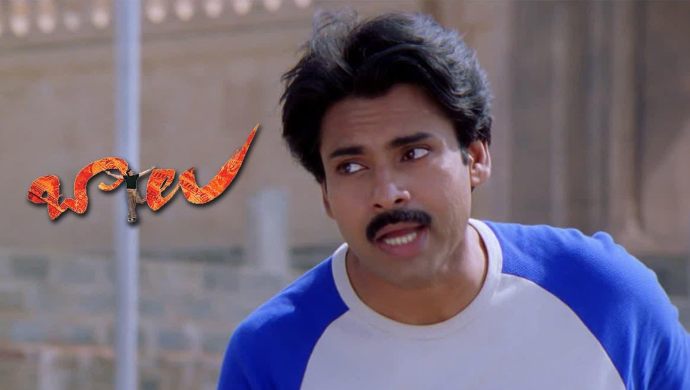 Throwbacks are always fun, and that’s the reason we look forward to Thursday. This time around we have a special film. It will make you laugh, cry, flinch your eyes, smile, and even keep you hooked for the climax. Moreover, it features a man who we cannot ever get tired of watching, Pawan Kalyan. We’re talking about the power star’s 2005 action-drama film, Balu.

Directed by A. Karunakaran, Balu features Shriya Saran and Neha Oberoi in the lead roles. The movie showcases two different stories interlinked at one point. This makes it interesting and a constant mystery lurks around in our minds. The story begins in a small area called Mahankali Market. As it was the norm in those days, the businesses ran peacefully, thanks to their owners paying money to local goons. Here, it was Naayudamma and his main man, Dasanna.

Balu comes in and sets up his flower stall. The people around look up to his ways of manipulating or impressing the goons. He meets Priya (Shriya) at his store, but no sparks fly. Instead, most of their relationship is filled with silly fights. One night, Balu’s mother faints and Priya sees the other side of Balu. This makes her fall in love with him and she takes the chance of proposing him.

However, Balu turns it down. A long and unexpected history starts unravelling when Balu explains about his background. It turns out, Balu was called Gani earlier. And his mother, who is lying on a hospital bed, isn’t really his mother. In fact, his family isn’t really his family. In such a case, why did Balu come to Mahankali? Why is he maintaining a fake image? Find it out here.

You can now enjoy more free films on ZEE5. Don’t forget to check out some retro movies, too.