Last week in Thoorpu Padamara, Shruti puts Gopi through a blood test and also gets her phone checked by Bebakka. Read the full weekly update here. 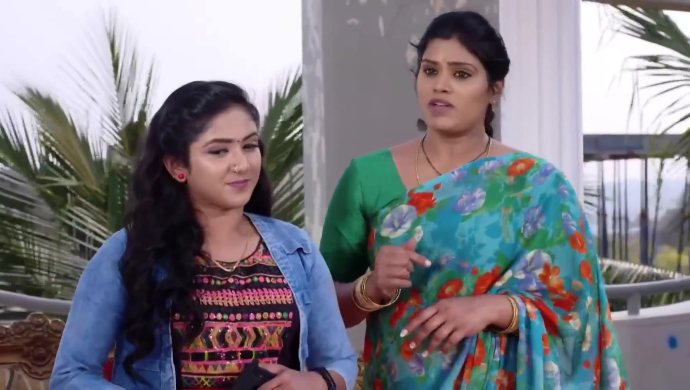 In the week before the last in Thoorpu Padamara, Vinaya likes the idea of setting up his brothers-in-law with girls of entirely opposite characters. That’s when Laya meets Rocky and Shruti meets Gopi. They agree to marry each other. But Mohini feels annoyed to know that she will not be marrying into the same family as her sister. So, she calls their elder brother, who they fear because of his criminal records. The brother calls Vinaya to meet him.

Vinaya gets her mother-in-law stuck with unwanted guests and she leaves to meet her brother in the jail. There, she sees her brother cleaning a toilet and finds out that he has been in jail for polygamy.

Bebakka tells Shruti that she cannot agree to marry a stranger without enough research. So, she gives Shruti a handful of tests to put Gopi through.

Rocky comes to meet Laya, and holds her hand. But Laya gets uncomfortable and Aishu witnesses the same. So, Aishu takes over the charge to get Laya out of the situation and make sure that Rocky does not learn about Laya’s reality.

Shruti meets Gopi at a hospital and tells him that she needs his blood to save her friend who shares the same blood group. Gopi finds out from the nurses that it is a set up to get his blood tested. Gopi takes it positively.

Shruti and Laya meet the next day and talk about their would-be husbands. They also tease each other, because they will soon become sisters-in-law.

Later, Laya gets annoyed of Rocky’s constant texts and decides to call him. She asks him to meet her the next day and this gets Rocky excited. It makes him believe that Laya was finally coming to the same track as him.

Vinaya’s brother sends his men to kidnap the pundit who is supposed to wed Gopi, Shruti and Laya, Rocky. The men instruct the pundit to announce that their brides and grooms are not fit for each other, given their jatakam.

The next morning, Rocky and Laya meet. He dives straight into the topic and asks if she prefers traditional outfits over modern. Before Laya could answer the question, Aishu distracts him and tells him that Laya will be lying because her mother is around them, observing Rocky’s character.

Shruti and Gopi meet in a coffee shop. And as instructed, Shruti’s job is to get hold of Gopi’s cellphone. She drops a hot cup of coffee upon him to get his phone. Bekakka takes the phone and goes through it.

Laya comes back home feeling happy that Rocky has agreed with her ways of life. She taunts Aishu for running behind her all the time. But when Laya goes to talk to her goddess, Aishu drops her comments and makes herself a more important person in the conversation.

Read more about this show here, and find all the updates of your favourite shows here. You can also check out all the latest episodes on ZEE5, before it airs on TV.

Trinayani Weekly Update 9 to 14 March 2020: Subhadra's Life Is In Danger