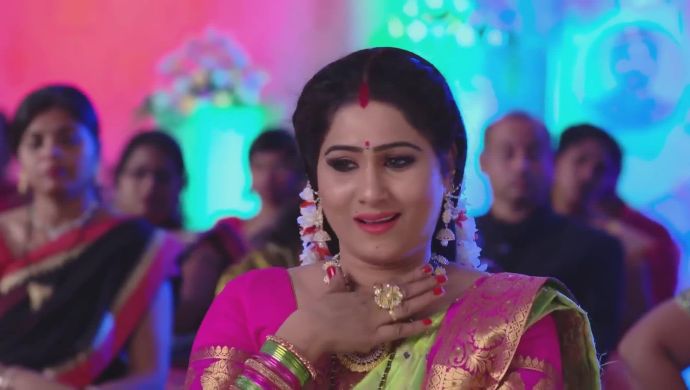 In the week before the last in Thoorpu Padamara, Lord Vishnu tells Narada and Goddess Saraswati about Laya and Shruti. Laya turns out to be a simple and traditional girl, who is close to her family, and finds good in everything. Shruti, on the other hand, turns out to be a pessimist. She questions and doubts everything. Janakkamma tries to find two girls who will be suitable for her sons, Gopi and Rocky. Vinaya, her eldest daughter-in-law, decides to set her sister with one.

Aishu asks Laya to pose well in the ‘modern dress’, despite being uncomfortable. When the photographer starts hitting on her, Laya reaches a point of exhaustion. She returns in a saree and delivers a speech on why traditional ladies are as good as anyone else.

Shruti meets the bride and asks her an array of questions about her husband. The bride tries to tackle the problem but ends up having the same doubts about her newly married husband.

Vinaya notices the two girls closely and feels happy upon unravelling some layers of them. She feels proud of her thoughts and decides to mix and match the girls with her brothers-in-law.

Vinaya instructs the wedding broker that he has to introduce Shruti to Gopi and Laya to Rocky. The wedding broker feels sceptical about this combination but decides to follow her instructions.

A random girl poses to be Gopi’s patient and tries to flirt with him. But he pays no heed to her. It turns out that she was playing the part as instructed by Bebakka, to check Gopi’s character.

Laya sees Rocky’s photograph and agrees to meet with him for the Pellichoopulu. Aishu tries to convince her that the boy will be the perfect fit for her. In fact, she also makes Laya wear another modern dress, as instructed by Vinaya.

Shruti meets Gopi and asks him several questions. When he tries to counter her, she tells him that her only intention is to know her would-be husband better. Shruti, then, approves of him.

Vinaya and Janakamma beg Rocky to see the photographs, at least, before deciding to meet her. He feels unsure but smiles wide when he finally sees Laya’s picture. He also claims that he is in love with her.

Finally, Laya and Rocky meet at her house. Rocky tries to get to know her better and Laya talks about her love for dancing.

Aishu drags Laya to Shruti’s house and has a small banter with Bebakka. When she finally lets everyone know that Shruti and Laya will be marrying two siblings, Bebakka turns around and starts behaving sweetly with Aishu.

Mohini finds out that Vinaya has been using her to fulfil her personal needs. Mohini, then, decides to take things into her own hands and take charge of her wedding with either Rocky or Gopi.

Read more about this show here, and find all the updates of your favourite shows here. You can also check out all the latest episodes on ZEE5, before it aires on TV.

Kalyana Vaibhogam Weekly Update 2 To 7 March 2020: Manga And Her Baby To Die Soon