If you want to know what it feels like to laugh uncontrollably, this scene from this Telugu romcom is exactly what you need! 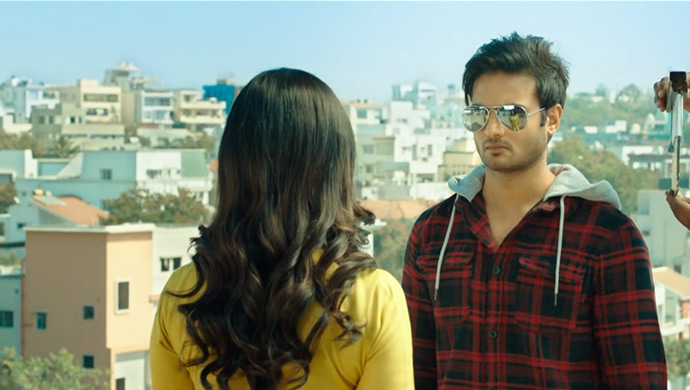 The 2018 hit Telugu film, Nannu Dochukunduvate, is a romantic comedy audience fell in love with. It is the story of two oddballs, living their lives on two different extremes, who eventually fall in love. The ‘hero’ of the film is Kartik, played by Sudheer  Babu Posani, who does nothing heroic in most of the film. The ‘heroine’ of the film is Meghna, played by Nabha Natesh, who believes she is the next superstar and lives like one.

Due to circumstances, Kartik lies to his father about being in love with a girl and now has to find someone who can act as his love. Meet Meghna! After disagreements and almost hating each other, they bond and fall in love. Later, Meghna decides to cast Kartik as the lead actor for her next short film that is ‘very emotional’, as the director puts it. What follows is a laugh riot!

Kartik is given the dialogues. The set-up is ready to roll.

Being new to the world of acting, Kartik stiffens up and is unable to remember his dialogues. He constantly looks around, trying to figure out what to say next and the director Harsha, played by Viva Harsha, says “Bro! bro! Cut bro!”.

Harsha intervenes and suggests that the dialogues should be felt first and then the emotions should be reflected in his eyes.

As soon as the director commands ‘action’, Kartik widens his eyes and by the time he completes his dialogues, his eyes are red and tears stream down his face. Tch! Kartik, the director meant it as a metaphor…

It’s time for Harsha to intervene again! With patience and passion, Harsha tells Kartik that acting is like a teacher’s lesson in the classroom.

Kartik is happy that he finally understood the brief. His next move turns out to be… delivering his dialogues the way a teacher recites poetry in the classroom… (facepalm or LOL?)

Unable to bear the scale of Kartik’s craft, Harsha talks to Meghna. He says Kartik is ruining his most emotional and romantic dialogues. He goes on to add that among the nine rasas, Kartik is ensuring that he uses none in his acting.

Thirty-four takes later, Kartik makes another attempt after Meghna suggests that he can do it if he believes in the situation. And post a filmy glimpse at Meghna, Kartik does this…

And we’re reminded of this…

As we hold our tummies trying to control our laughter, Harsha and his crew reach the peak of their frustration levels and Harsha yells, “Pack up!!”

Pro tip: Stay away from water and food while watching this hilarious scene from Nannu Dochukunduvate if you don’t want to choke.

This Festive Season, Feast On This Gluten-Free & Healthy Cake By Upasana Kamineni Konidela

I am happy if Ala helps even one person, says director Sarat Palanki