Allu Arjun’s recent song is being promoted as the #HalfCoatStep, but his daughter, Allu Arha, has a funny take on it. Here’s what she says 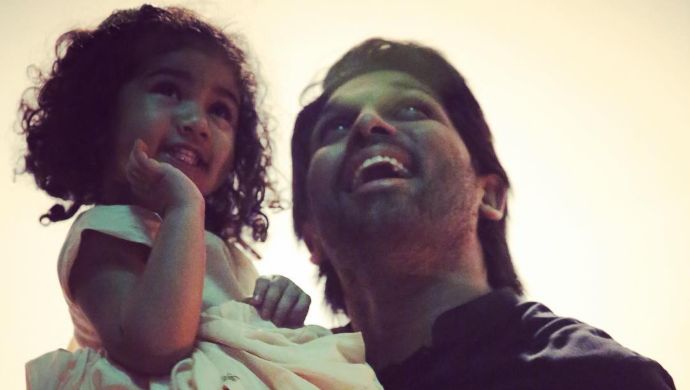 It’s time to celebrate because Allu Arjun graces the 70mm screen, in a few days. It has been almost a year and a half, since we saw him on the big screen. Post the massive success of Naa Peru Surya, Naa Illu Surya, Allu Arjun will be seen in Trivikram Srinivas’ Ala Vaikunthapurramlo. The film boasts of a stellar cast and its music is already topping the charts. Recently, during the mega trailer launch event, the actor poured his heart out, as he spoke to his fans after a long time.

Recalling an interesting and hilarious incident, Allu Arjun laughed out loud, as he tried to tell his fans about how his daughter, Allu Arha, reacted to the song, Ramulo Ramula. The actor spoke about the efforts that went into making the track a hit number. “After working so hard, coming up with the publicity planning, coming up with the #HalfCoatStep for song, and getting the CG in place… you will not believe what Arha said about the song,” he said.

Allu Arjun went on to narrate the story and said, “That day, my daughter had come to set to visit me. When she went back home, my wife asked her about what I was doing during the day, and she said, “Em cheyale. Nanna Shirt sarigga vesukokunta gallilo dosalu vestunadu” (He didn’t do anything. He was doing the dosa step without wearing his shirt properly). And since then, “Nanna dosa step vesadu” (My father is doing the dosa step) has become a real thing. Well, Allu Arjun will agree that #TheDosaStep would have been a better hashtag for his number.

However, the story does not end there. The poor father tried to come up with an apt response and said, “I told her making dosas will get me money, amma” to which, she said, “make dosas well, every day”. Well, just like his father, we agree when he believes “that’s how smart the girl is”. Have you tuned into the Ramulo Ramula song yet? What do you think suits it better, Allu Arjun’s Half Coat Step or Allu Arha’s Dosa Step?

Once again, we are with Arha. Let us know what you think about this cute father-daughter banter in the comments section below. Don’t forget to watch Duvvada Jagganatham on ZEE5, before heading out to watch Ala Vaikunthapurramlo on January 12, 2020.

Throwback Thursday: Here’s How Adorable Ram Pothineni Has Been Since ‘88!

Ninne Pelladatha Poll: Who Do You Think Kidnapped Kanakam?