Take A Look At Everything That Happened At Zee Mahotsavam 2019

Power-packed performances, the duo of Vijay Deverakonda and Rashmika Mandanna and more. It sure was a grand gala worth watching. 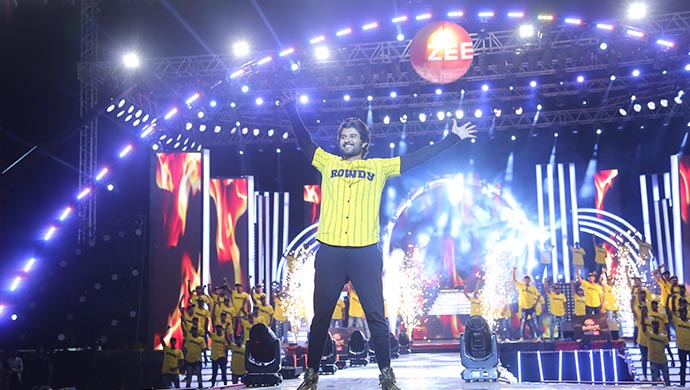 When the family comes together, even a meal turns into a celebration. And when it’s a celebration, there is nothing that can be more joyous. The entire Zee kutumbam came together to enjoy and recreate the magic of the Zee Telugu TV shows. And as you can guess, the evening was no less than a perfect celebration of bonds and culture. From ‘Rowdy’ Vijay Deverakonda’s smashing entry with his lady luck Rashmika Mandanna, to TV stars dancing to beats that will make you move, we list down everything that happened at the Zee Mahotsavam 2019, the 14th anniversary bash of Zee Telugu.

The celebration  began with popular actor and TV host, Pradeep Machiraju along with Srimukhi and anchor Ravi. While Ravi confessed his love for the channel, Srimukhi hailed Pradeep as the ‘muddu bidda‘ (loved child) of Zee Telugu. Srimukhi was then hailed as the ‘pedda bidda‘ (elder child) of Zee Telugu by the boys.

Soon after their little introduction, the three hosts called the entire Zee kutumbam on the stage. Together, looking like the most picture-perfect family, they swayed in harmony.

Then came the heroes of the Zee Telugu shows, who showcased their dancing skills. Srinivas Murthy of Bangaru Gajulu fame was the first to step on the stage with his amazing moves on Power Star Pawan Kalyan‘s song Made in Andhra.

Pradeep, Ravi and Srimukhi. who were applauding the men for their performances, announced that these men are no lesser than women. Pradeep suggested that in order to prove this, the boys must walk in heels like women do all the time.

Ali and Vishwa tried walking in heels like a ramp walk. We must say, they totally aced it. Although Vishwa slipped and tripped once, Ali managed to do it perfectly. Looking at this perfection, Pradeep couldn’t help but say, “tala ettukunela chesaaru” *puns intended* Pradeep, Ravi and Kaushik tried on heels next. While Kaushik smoothly pulled off a dance performance on Rangastalam’s Jigelu Rani, Ravi gave up and confessed that men can’t do what women are capable of.

Next up were the heroines of your favourite Telugu TV shows. Actor Sindhura opened the performance to Priyathama from Samantha and Naga Chaitanya‘s Majili. Akka Chellelu‘s Chaithra Rai swayed to Prema annade pareshanura, Ninne Pelladatha‘s Sree Priya showed off her belly-dancing skills to the song Maiya Maiya, Madhubala rocked the stage with her moves on the song Chandralekha and it all ended with a bang with Down Down Baby by Pranavi.

You saw your heroes and you saw your heroines dance on the Zee Mahotsavam 2019 stage. What next? The Zee Telugu couples! TV heartthrob VJ Sunny opened the act with his Dance Jodi Dance partner Vaishali on the song Madhurame from Arjun Reddy.

Chaitra and Ravi Krishna performed to Inkem Inkem Inkem Kavale from Geetha Govindam. Prema‘s lead couple, Princy and Nirupam Paritala, danced to Reppalaninda and Yamini and Prajwal of Mutyala Muggu lit up the stage with their chemistry. Krishna and Sandra of Muddha Mandaram fame brought back the old memories with their closing act.

The hosts went to the real and reel life couple Haritha (who plays Akhilandeswari in Muddha Mandaram) and Jackie for a fun conversation. They brought them back on stage. From sharing the screen in a serial to becoming life partners, Jackie and Haritha shared their sweet love story in front of the audience.

We all wait for love stories and sweet little things in our favourite TV shows. We all love the hero and the heroine too. But it is, in fact, the attas of the show who make our wait worthwhile and interesting. Ninne Pelladatha‘s cruel atta, Jayaram Pavithra, opened the performance on the song Kannalenu in an elegant white outfit.

Bhavana Reddy of Muddha Mandaram and Bhavana of Kalyana Vaibhogam continued to show us why we need the spicy attas in the shows. Jyothi Reddy concluded the act perfectly with her mesmerising moves on the song Kanna nidurinchara from Baahubali 2.

Taking us all by surprise, Ali and Suhasini performed a romantic duet dance on public demand. We wonder if we will ever see the chemistry between them on screen too.

Now was that moment of the night for which 60, 000 people were waiting for. The grand entry! ‘Rowdy’ Vijay Deverakonda made his way to the stage along with his battalion of a hundred men.

Vijay hyped up the crowd in ways that we couldn’t possibly imagine. He spoke about his love for his fans and made them yell “Hoo. Hah”. He even asked them about the teaser of his upcoming film Dear Comrade. He sang Nee Neeli Kannullona along with Gautam, the singer, and introduced his lady love in the film — Rashmika Mandanna. Together, they even brought the magic of Yenti Yenti alive on the stage before saying goodbye.

Ravi and Pradeep instilled the josh along with Vishwa, Srinivas and Ali for the upcoming Cricket World Cup 2019 as they took us to the final segment of the evening. Srimukhi set the stage on fire with her surprise performance on Deepika Padukone’s popular song Ghoomar and the sensational Marathi song Jhinghat.

Manasa Charan and Sunanda Mala Setti added all the glamour to the evening with their performances on Zara Zara and Laila Main Laila, respectively.

Lastly, the super dancers of Atta Juniors and Dance Jodi Dance concluded the evening with their kick-ass performances. You can watch the full show above.

You can catch Vijay Deverakonda’s Geetha Govindam on ZEE5.