Swaroopa Turns The Tables Against Nithya, Leaving Her Helpless In Kalyana Vaibhogam!

The game between Nithya's pride and Manga's survival gets more and more interesting now. Here's what happened. 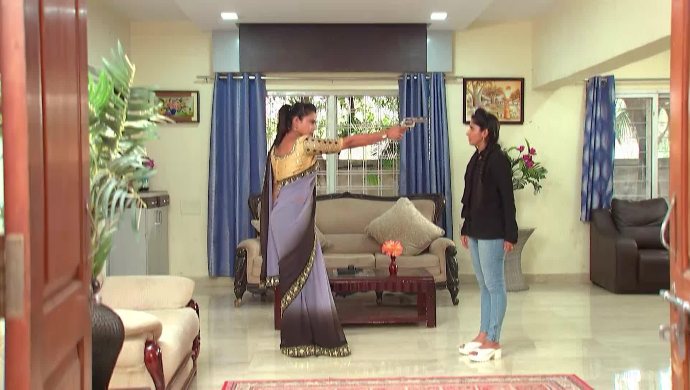 If you thought the drama between Manga and her twin Nithya (played by Meghana Lokesh), in the Telugu TV show Kalyana Vaibhogam, was over the top, then you are in for a bigger surprise. The drama is just getting real, bad and bolder. Nithya has successfully failed in beating Manga in her own game plans. Manga has managed to get herself and her family out of troubles and has begun a new life as, not only the wife of Suryadevara Jaisurya (played by VJ Sunny) but also as the only legal heir of Swaroopa Srinivas.

For the longest time, Swaroopa had hidden the fact that Manga, too, is her biological child who shared the womb with Nithya. All thanks to Nithya and her unlimited cruelty, she found out about this deep and dark secret. The evil Nithya continued to torture her own mother for her benefits by using this secret as the bait. Manga, on the other hand, continues to be unaware of this fact, despite becoming the legal heir of Swaroopa. Manga used her brain and turned things to her favour with only one intention – to take down Nithya for all her lies and fake stories.

The recent developments between Nithya and Swaroopa have embittered their relationship more than ever before. Now that Swaroopa has signed the dotted line to give Manga the power of attorney to her wealth, Nithya feels paralysed. In this fit of rage, she pulled out the gun and kept her mother at the gunpoint. As per usual, we would have expected Swaroopa to fall prey to her plans and surrender. But not this time! Swaroopa snatched the gun out of her hands with extreme smoothness and pointed it towards Nithya. Well, sorry to burst your bubble. But Swaroopa did not kill Nithya. She let her go with a warning. Let’s wait and watch to see who takes the next step and for what.