We always knew how low Kantamma could fall. But this time, she truly crossed all of her limits. What do you think? 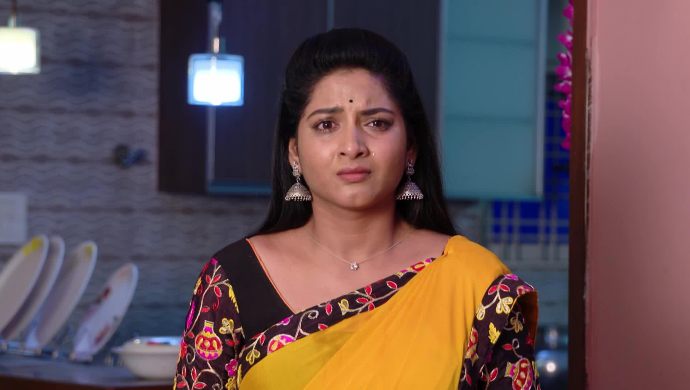 Recently, Vamsi proposed to Vasundhara (played by Ali Reza and Pallavi Ramisetty) and it was a dream come true for them and for us, in the Telugu TV show Maate Mantramu. However, all good things come to an end. So did this. After Vamsi dropped Vasundhara home, she walked inside to call it a day and sleep the best sleep ever. But fate had different plans for her. Soon after stepping inside,  she got the foul smell of alcohol and as she took a few steps, she found Jogendra sleeping next to Alekhya on her bed in a drunken state. After taking a look at Alekhya, she tried to wake her up. But Alekhya didn’t respond. It didn’t take long for Vasundhara to connect the dots and realise what Jogendra must have done to Alekhya. She felt that it was her mistake to leave him alive and free the last time when Vamsi had insisted that he be put behind bars.

Vasundhara did what it took. She dragged the drunk and dirty Jogendra out of Alekhya’s room and into the living room. She tried to get the truth out of him and once he revealed, he was done. Vasundhara found the nearest weapon — a knife — and started stabbing Jogendra without aiming for anything. When she realised that had done more harm to him than possible, she dragged him out of the house in his semi-clothed state and left him there with blood oozing out. She came back inside and cleaned up the house, spotless. She also cleaned up Alekhya and redid her hair because she mustn’t bear the brunt of someone else’s misdeeds. She tried to wake her up again. But she did not respond. So Vasundhara left Alekhya’s room, leaving her to rest.

Sometime later, Kantamma found Jogendra in the bad state, and sent him to a hospital along with one of her henchmen. Then she went inside the house. She asked Vasundhara why she took such a drastic step. The evil lady revealed that it was her plan to tie Vasundhara to Jogendra and marry her off, away from Vamsi and the Kakarla house — because only Alekhya deserved something that’s good. Since Vasundhara got a way out of Jogendra’s life, she planned to do something like this — get Vasundhara unconscious by spiking her food and leaving the rest to him. We all knew how cheap and dirty Kantamma was. But this was truly disastrous. What do you think?

Get Ready For The Laughter-Riot That Is ZEE5 Original Mrs. Subbalakshmi.