SHOCKING! The Latest Developments In Kalyana Vaibhogam Will Leave You Captivated

Jai's reaction to Manga's last rites, Nithya's new plan, Manga's future, and more! This episode gives an insight into everything in Kalyana Vaibhogam. 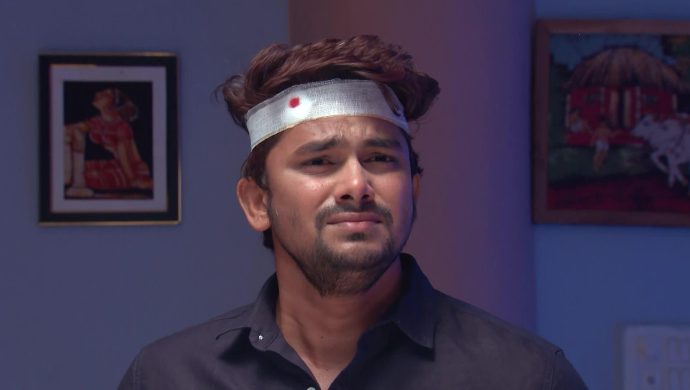 We are sure, no cliff-hanger in a show made you feel as stuck as Kalyana Vaibhogam did. The three-month-long lockdown put the fans of this Telugu show under immense pressure with its unending suspense. Before the lockdown, we saw everyone mourning Manga’s (Meghana Lokesh) death whilst she was only unconscious due to a heavy dose of Nithya’s (Meghana Lokesh) sleeping medicine. Finally, the show came back to us. Now, it is gotten better than it was ever before.

Recently, we saw that Manga wakes up from her deep sleep because of the labour pain. Jai feels immensely happy to know that his wife is alive. They all rush to the hospital but meet with an accident. Like a perfect plan, Manga falls off the cliff and everyone else meets in the hospital again.

Now, Jai is made is to believe that Manga has died. Chandrika and Prasad initiate the conversation of performing Manga’s last rites. He feels outraged by the liars around him, who lied to him all his life.

But in the end, he agrees to it. The next day, Jai goes to the riverside to give Manga the respected goodbye that she deserves. However, he keeps wishing for her to return.

In another corner, Manga screams in pain. An elderly lady keeps her company in an isolated house. She tries to calm Manga down as she goes through the labour pain.

On the other hand, Nithya claims that she has been a terrible person all along, wishing for death upon her own sister and harming her family. She announces to leave Swaroopa and her home, as an act of self-inflicted punishment. Swaroopa asks her to do it after accepting her mistakes in front of Jai.

The old lady successfully delivers Manga’s baby. She comes out to tell her husband that the ‘unknown girl’ has delivered two healthy babies. The old lady also claims that the babies and the mother healthy.

Now, we’re excited to see when and how fate brings Jai, Manga and their kids together again.  Let us know what you think about it. Watch all the episodes of Kalyana Vaibhogam on ZEE5, before it aires on TV.