On the occasion of Sankranthi, through a beautiful video, the superstar introduced three TV shows that will premiere soon. Watch the promo here 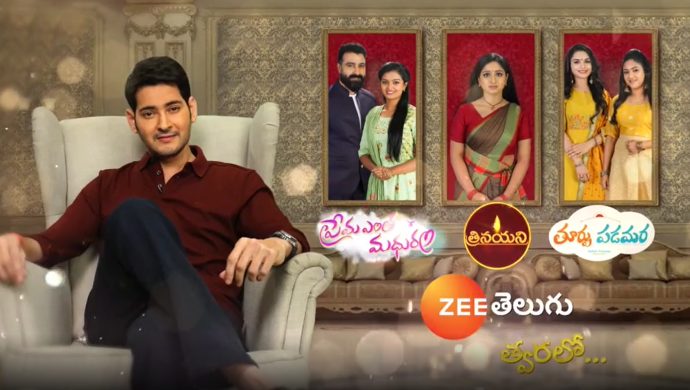 Recently, the longest-running Zee Telugu show, Muddha Mandaram, saw its final episode. Just like many people out there, we are trying to make peace with the fact that the Ghattammaneni family has bid their final goodbyes to us. However, there are three reasons for you to look up and smile. Because Zee Telugu is all set to launch three brand new shows, soon. Talking about good times, the popular Telugu channel is all set to bring them to you. We have a little gup on the shows. Read about them below.

On the occasion of Sankranthi in the new decade, superstar Mahesh Babu joined hands with the channel to talk about the three new shows. They are titled Trinayani, Thoorpu Padamara and Prema Entha Maduram, respectively. The actor, who is on the promotional rounds for his film, titled Sarileru Neekevvaru, expressed his gratitude and happiness to be loved by his people through the channel. He also gave us a little sneak peek at the upcoming shows.

Trinayani is the story of a woman who sees the future and uses her prophecies to help people in bettering their lives. The protagonist, of the same name, also sees visions from the past. Although unsure of her abilities initially, Triyanani eventually learns the art of channelling her powers. With every solved problem, Trinayani’s fame begins to grow manifold. This show also happens to an adaptation of the Zee Bangla show titled Trinoyoni.

Thoorpu Padamara is an original concept by the Telugu channel. The story of this show revolves around two girls, named Laya and Shruthi, who are polar opposites of each other. While Laya finds her way through the darkest of the nights, with a smile on her face, Shruthi finds it difficult to take a single step. Laya belongs to a humble family where little is enough, and Shruthi hails from a rich family where every demand is fulfilled without any delay.

Prema Entha Maduram is an adaptation of the extremely popular Zee Marathi show titled Tula Pahate Rey. The story features a middle-aged man, Aryavardhan, and a young girl, Anu, who meet each other because of some events in their lives. They end up falling in love with each other and everything goes for a toss. How they ensure that their love emerges triumphant despite the various challenges forms the crux of the story.

Stay tuned for more updates on these shows along with the others. You can also check out all your favourite shows like Muddha Mandaram, Kalyana Vaibhogam and others on ZEE5, before TV.

Fashion Friday: Here's How 'Stylish Star' Allu Arjun Has Lived Up To His Title