REVEALED: Jai To Unleash His Fury On Manga Now In Kalyana Vaibhogam?

We have seen the caring and loving side of Jai all along. But will he unleash the other side to him? Read to find out more about it. 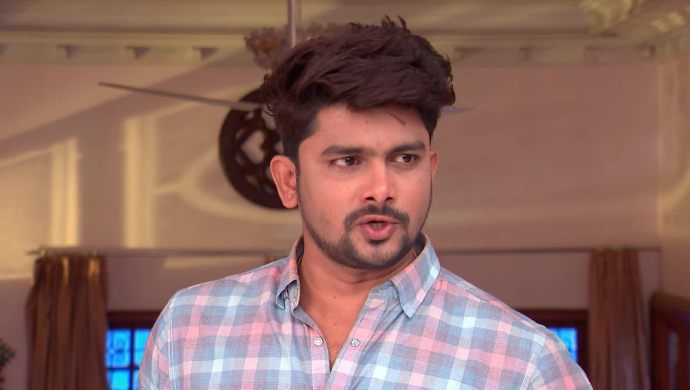 Recently, the feuding twins of the Telugu TV show Kalyana Vaibhogam, Nithya and Manga (played by Meghana Lokesh) gave up their hatred and are now pretending to like each other. Post handing over the car keys, bank cards and the Power of Attorney papers, Manga decided to help her sister settle down in life. So, she found a suitable match for Nithya in an NRI called Vijay. Surprisingly, Vijay turned out to be Jai’s (played by VJ Sunny) long-lost best friend. And Vijay’s wedding turns out to be a huge opportunity for him to rebond with his old friend. But Jai is still in the dark about Nithya while Vijay knows the truth about the twins.

Jai loses his calm and temper when Vijay spills the beans about Manga and Nithya’s identity. He asks for confirmation, and Manga’s silence gives away the answer. This makes Jai more furious. He feels cheated — not just by his wife, who he loves unconditionally, but by Nithya and Swaroopa too. In this fit of rage, despite everyone else’s attempt to calm him down, Jai drags Manga out of the house. He demands that she goes and takes away the ‘poison’ in her womb. But! But! But! This was all in Manga’s head. When Jai drags her out of the room to meet Vijay, he greets her and plays along. Now, that’s what we call a sweet surprise!

Earlier, Vijay had invited Jai to come along with him when he had to visit the Srinivas’ for the first time. Jai and Chary assumed it to be a GPS error and let go of the opportunity. Next time, Jai met his friend midway but Manga figured out that he was meeting Vijay and escaped silently. Now, Jai and Vijay have promised to meet each other over lunch along with their better halves. An excited Manga was pumped to meet him until she realised that Vijay and Nithya were the guests. She locked herself in her room but at one point, Jai dragged her out to meet Vijay because Nithya had successfully escaped before entering Jai’s house.

Stay tuned for more such updates. For more entertainment, watch Ninne Pelladatha on ZEE5 before TV.

No 1 Kodalu 17 July 2020 Preview: Peddayyaiah Asks Everyone To Stay Quiet

Rakhi Special: Tollywood Stars And Their Siblings Who We All Should Know About Today

6 Scenes From Mr. Majnu Featuring Vidyullekha That Will Make You Want A BFF Like Her