We are as shocked as you are. This move has made her pure evil! Read on to find out. 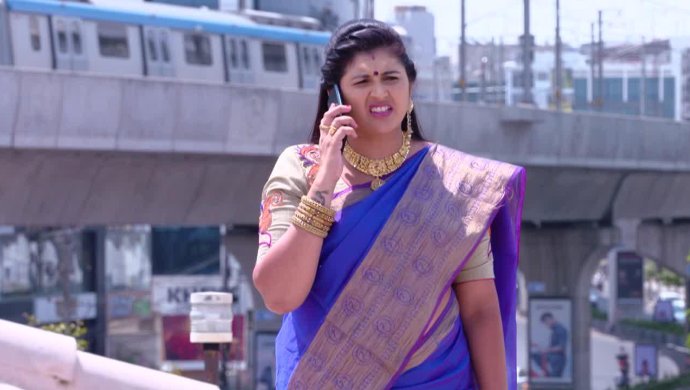 Ever since actor Madhubala’s character Mrudula came back from the dead in the Telugu serial Ninne Pelladatha, literally everyone has been overwhelmingly happy. Well, everyone except for Madhu (played by Abhi Prathap). He has been keeping a distance ever since the doctors mentioned about Mrudula’s pregnancy. He kept stressing that Mrudula and he had never come so close. Therefore, the matter was all the more alarming. All thanks to Sarayu (played by Sarayu Roy), the secret that Madhu had been trying to keep was now out in the open. In the previous episode, aired on June 3, 2019, we saw that Sarayu disses Mrudula’s mother Vasanta and talks trash about them. Here’s exactly what happened in the Telugu TV show on June 4, 2019:

We saw Mrudula sitting in the room, all by herself, sulking and crying about the hardships in her life. She kept remembering how Brahmini and Sarayu spoke about her and her family. We then see Madhu entering the room and seeing her in a miserable condition. He picks her up and gives her hope that they will make things better together. Mrudula tells Madhu that she would like to take a second opinion on the reports. Madhu agrees to take her to another hospital in the morning.

The next morning, Madhu and Mrudula leave for the hospital after informing Bharati. Brahmini calls Sarayu to check up on her son since Madhu wasn’t responding to her. Sarayu tells her they’re visiting the hospital. This makes Brahmini concerned, and she calls Madhu to check where he is. Madhu clearly answers that he is with Mrudula in a different hospital. Brahmini freaks out on hearing this.

Brahmini calls up the doctor at the Kamineni hospital and starts yelling at her for being careless. She tells the doctor that Mrudula has gone to a different hospital for a second opinion. She says confirms that no matter where she heads, her reports will be negative. Brahmini tells the doctor to do whatever it takes and ensure that the new doctor aligns with her plans. The doctor is taken aback since there are hundreds of hospitals in the city and tracing them in less than half an hour is difficult.

But… guess who succeeds? Watch the episode to know it. In the meantime, check out Maate Mantramu on ZEE5.

Will Doing The College Play Make Soundarya And Abhi Fall In Love?

TREAT ALERT! Vamsi Wants To Control His Feelings For Vasundhara