Reasons, Rituals And Richness! This Ugadi, Make The Traditional Pachadi In The Right Way

This Ugadi, let's make the delicious pachadi just like it's supposed to be, and also learn the mysterious history behind it. Read on! 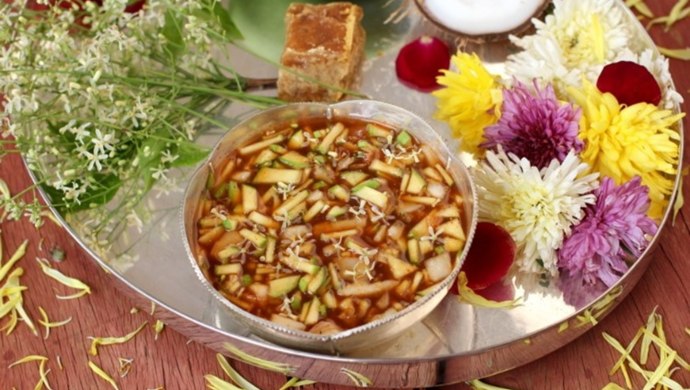 Ugadi 2020 must be grander than usual, because none of us can make any excuses for not doing the chores, during these self-quarantine days. In such times, it is more important than ever before to start things on a positive and hopeful note. That’s also what the festival is all about.

On the day of Ugadi, after performing the poojas, the Ugadi Pachadi is offered to Lord Brahma. This Ugadi Pachadi is also known as Shadruchulu, in some regions. This special dish is prepared only on Ugadi and is the first thing that one consumes on the festival. Because it is offered to the gods first, it is also known as the Ugadi Naivedyam. This Pachadi consists of six special ingredients, although people tend to alter it to suit their tastes.

However, that isn’t something that we should do. Each of the elements that make up for this Pachadi is special and hold a psychological belief. To make the Ugadi Pachadi, we need neem flowers, jaggery, raw mango cubes, red chilli powder. tamarind and salt. When these are combined together with water, we get something that gives us an explosion of taste. While our taste buds enjoy this flavourful pachadi, we prepare ourselves with some beliefs.

Here’s what the six ingredients signify:

Neem Flowers: These flowers are bitter by natures, and hence, represent bitterness in our lives. While people prefer brushing such moments under the carpet, Ugadi teaches us to embrace it.

Jaggery: A natural sweetener, jaggery is used to represent the happy moments in life. By gulping it down with everything else, the festival teaches us everything shall pass and one mustn’t dwell on it.

Raw Mango: A popular summer fruit, the raw mango is equated with surprise. No matter how well we plan our lives, it will always throw some curveball or surprise on our way.

Red Chilli Powder: Given our tamasic aharam and the times that we live in, anger or frustration is becoming more and more common. Red chilli power represents that and teaches that it mustn’t overpower or consume our life wholly. This, like everything else, is just one part of our life.

Tamarind: Tamarind is considered to be sour, by nature. We add the pulp of tamarind in the pachadi, which represents the sour moments in our life. Even such moments are important for us to live a wholesome life.

Salt: Last of all, is the king of all foods. Salt represents the true taste and joy of life. No matter what the problem is, take it with a pinch of salt and it becomes better.

Are you excited to make your own Ugadi Pachadi this year? Let us know in the comments section below. Watch amazing films on ZEE5 during this quarantine season.