Raahu Review: The Damsel Saves Herself And Her Kingdom In Subbu Veddula’s Thriller 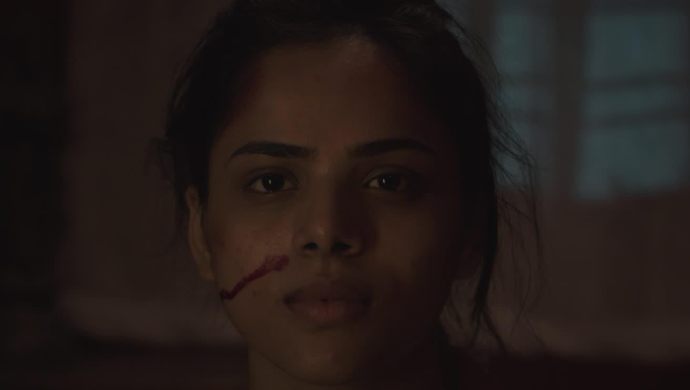 Raahu is a 2020 thriller, directed by debutant Subbu Veddula, which stars Kriti Garg and AbeRaam Varma. Produced under the banner of Suresh Productions, Raahu recently saw its digital release on ZEE5. The film spans almost two hours and manages to keep you engaged. At a time when staying indoors is becoming a tad bit difficult, good cinema can also keep you seated. If you haven’t seen it, we suggest you do it soon.

Often while watching thrillers, we rush to find out the root of the problem. Raahu lays it out openly for you… until, it doesn’t.

Watch the trailer of Raahu here:

Raahu, as we know, is the Indian word for eclipse – a phenomenon which casts a shadow and causes darkness. The protagonist is named Bhanu, translating to sunrays or brightness. The text used on the posters of the film is also deeply significant. The white shadowy cast besides the main text corresponds to the condition that our protagonist here suffers from, Hysterical Blindness – a branch of Conversion Disorder.

The story begins in a car with a man and a young girl. They are father-daughter, a police commissioner and his six-year-old daughter, Bhanu. They talk about the void in Bhanu’s heart and their lives left by her mother. But the father (played by Subbu) talks rather maturely by informing that she is in a better place, “in god’s hands”. Soon, the father announces that they have to take a detour because a much-wanted criminal has been traced.

Bhanu doesn’t ask too many questions, she simply nods. Upon reaching, she expresses her concern but also gives him strength. The criminal here is Nagaraj, played by Kalakeya Prabhakar. A whole action-sequence, with guns and blood later, Nagaraj is under police custody. Seeing her father, Bhanu knows that something isn’t right and her life, possibly, will always be at risk.

Much later, Bhanu gets kidnapped in an expected event and the story really kicks off. How she gets out of trouble and saves herself is the crux of the story. A feminist point? Well, here’s the beauty of Subbu Veddula’s Raahu. You can conveniently replace the girl with another person and it would still make the same noise. While we are still talking about making the world an equal place for all, Raahu acts on it. And for that alone, it deserves applause.

There are several characters here and we’re not talking about walking-talking human beings. Even the doors and plants in this film play a role. We are living in a time where picturesque locations are used to beautify the film. But the beauty that comes with inanimate things adding character is unsounded. Most humans here seem to play their one-line description. But that’s alright because as the story progresses, we start to notice the layers underneath their one-line descriptions.

Bhanu, played by Kriti, is the ‘hero’ of the film. At no point does the filmmaker showcase her as a victim of society. She’s smart, educated, respected and enough. In the 2009 Anushka Shetty-starrer Arundhati, the protagonist (also a woman) decides to give in to her circumstances before standing up and fighting again. But Bhanu, in 2020, does not even think of it. That’s good progress, isn’t it?

The director does not want us, as viewers, to have a soft spot for Bhanu simply because she is a woman. In one shot, he does. We think this is going down the same beaten path again. But surprise, surprise! The following punch is harder. There are three men at the forefront with Bhanu. Her father, her lover and her hater. Each of them explains their motive to feel whatever they do in their own little ways. But when the clock ticks closer to the climax, tables start to turn.

The film also sees an unexplainable love track. Why did they fall in love so quickly? Why did they trust each other in no time? It’s a pattern we have been seeing for aeons, with little room to question. The love story isn’t great, but it does the job. Sid Sriram’s track Emo Emo also brings a breeziness to this otherwise dark film. On the contrary, there are plenty of loose ends that the director closes, craftily, in the climax.

Often while watching thrillers, we rush to find out the root of the problem. Raahu lays it out openly for you… until, it doesn’t. Apart from making his lead shoulder the whole film, Subbu also introduces a sisterhood angle. We see yet another girl who looks strikingly similar to how Bhanu looked. She is also mother-less and stuck with her own set of fears. As Bhanu fights the odds, it is almost metaphorical that she is trying to save herself, her childhood – presented as the girl, Spurthi.

The writing, direction and acting by most are rock-solid. However, we cannot do away with the camera department, helmed by Suresh Ragutu. Most parts of the film are undoubtedly dark. But that’s also the mood of the film or the situation. Each time, there is hope, there is light. Each time there is trouble, there’s sun-down – sometimes with pretty colours, too.

As our last word, Raahu is one step forward for Telugu and Indian cinema as well as films with a female protagonist. Here on, we hope it only spirals upwards.

Don’t forget to watch the full film on ZEE5.

Was Part Of NTR’s History As It Rolled Out, Says Vishnu Manchu On High…

Monday Motivation: Give Your Tresses Some TLC With Vithika Sheru’s Secret…

EXCLUSIVE: It Was Equally Rewarding To Do A Web Series Like Loser, Says Actor Priyadarshi

Birthday Special: 7 Telugu Songs Crooned By Sid Sriram That Work Like Magic On Our Souls