In the latest episode of Prema Entha Madhuram, the god-woman predicts Anu's marriage and blesses her. Read the full update here. 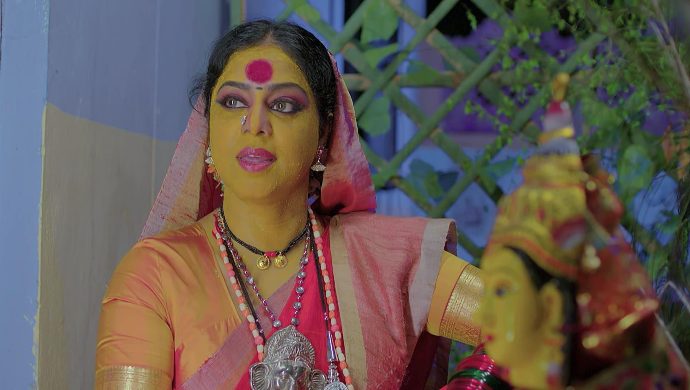 Earlier in Prema Entha Madhuram, Jende ignores the fakir’s suggestions, who asks them to turn back. Padma smartly sends Anu (Varsha) and Subbu away so that she could talk to Arya (Sriram Venkat) discreetly. Raghupathi and Rajini find out about Padma’s plan and tries to eavesdrop on their conversation. Jende tries to stop Padma from talking about Anu’s marriage, but Padma asks if they know about Anu and Sampath’s marriage.

In today’s episode, Jende relaxes the moment he hears Sampath’s name. However, Arya feels disrupted. By then, Subbu sees Raghupathi peeping through his window. Subbu sends him away and meets Anu on the way. They enter the house together, Subbu goes to get the gift and Anu greets him, but Arya does not respond. When Subbu gives the gift, Arya stands up in anger.

Padma apologises, and Arya tells them he wasn’t angry with the gift. He was pre-occupied with other thoughts. Arya accepts the gift and also gives them an another in return. Padma asks if she could open it, excitedly. She finds an elephant’s statue and Subbu says it is symbolic to Gajalaxmi, the goddess of prosperity. That’s when a god-woman passes by, calling out to Padma. Padma asks if she could return later since they had guests.

The god-woman claims that the guests may return, but the goddess won’t. So, Padma goes out and lays a mat for the god-woman. Arya asks Jende to give her money, but the lady says that she will not accept his money. The god-woman tells Padma that there will be a celebration in her house soon, Anu will get married. She asks Anu to get rice for the goddess, which isn’t a norm for an unmarried girl to do.

When Anu brings the rice, the lady blesses her saying she will get what her heart wants. Then, the lady tells everyone that Anu will pay off all their debts and bring a balance into their lives. She particularly looks at Arya and tells him that Anu will fix his life too.

No 1 Kodalu 27 June 2020 Preview: Maggie Insists On Eating The Rassam