In the latest episode of Prema Entha Madhuram, Anu finds her father dancing in a saree on the stage in a drunk state. Read the full update here. 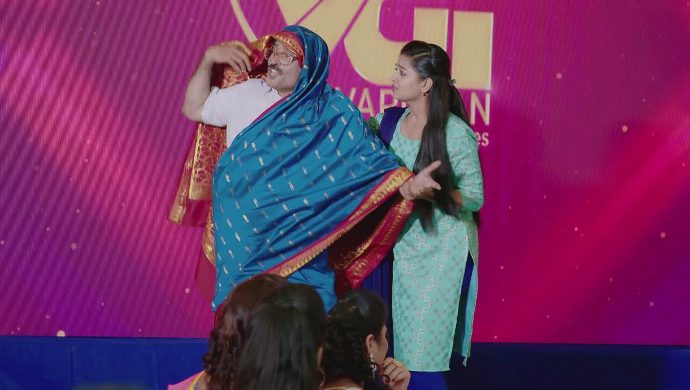 Earlier in Prema Entha Madhuram, Subbu’s customers look at him spitefully when he introduces himself. Arya asks Anu to repeat her mantra on Rs. 2 and even calls her up on stage to unveil their new product, citing her to be the inspiration behind it. Mira and the investors are taken aback by Arya sudden decision of slashing the price and try to talk to him. But Arya refuses to listen to them. Later, Arya and Anu indulge in a quaint conversation where Arya mentions that he values trust over love.

In today’s episode, Mr Jende tries to calm Mira down, as she looks at Anu and her family in a condescending way. Later, she meets with her friends and plans to get Subbu drunk. They force him to drink when he refuses to and convince him to drape a saree. Not only that, but they also get him on the stage to dance. Anu and Arya talk outside, and she tells him about her father – a naive man who gets bullied by his customers.

That’s when they hear loud claps from the auditorium. They rush there, and Anu finds her father dancing on the stage, in a drunken stage. Anu tries to get him down, as Mira speaks spitefully to Padma when Arya asks everyone to shut up. He scolds Mira for being brash and scolds Mr Jende for not being around to handle such behaviour. Arya, then, taunts others for being hypocrites, and applauds people like Subbu, because of whom they get to celebrate such parties.

Anu tells Arya that they will go home, and Padma goes back to the stage to collect Subbu’s shoe. Meanwhile, Subbu falls down to the ground and thanks Arya for speaking such great things about middle-class people. He tells Arya that he is a great man, and Arya helps him stand, and offers to drop them home. Upon reaching, Anu tells Arya that they live in a different world, and she would love to show him around. Arya appreciates and agrees to take the tour.