In the latest episode of Prema Entha Madhuram, Arya takes the blank cheque back by inviting Anu & her family for an event. Read the full update here. 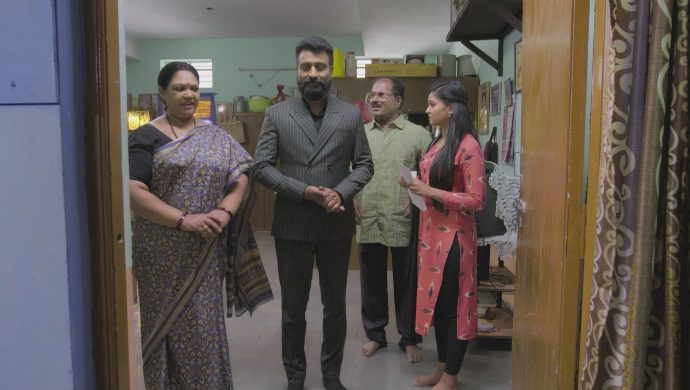 Earlier in Prema Entha Madhuram, Padma goes to the bank but finds many distractions. Subbu and Anu find Padma in the bank moments before she penned down the amount on the cheque. The three are asked to leave the bank because of the chaos that they created. Padma argues with them all along the way. She sees the ‘fridge-repair’ guy and starts talking to him. But when Subbu and Anu inform that he is Aryavardhan, Padma apologises and asks him to join them.

In today’s episode, Subbu apologises to Arya for all the mess, but Arya tells him that their mistake was unintentional. Arya looks at Mira, and asks her to apologise to Anu for her harsh behaviour. Padma starts talking about all the things that make them poor and all her dreams that are left unfulfilled. Anu and Subbu ask Arya to take the cheque back, but he tells them he does not want it back. When Anu insists that he would be helping them by taking it back, Arya proposes something.

He tells Anu that she must attend his upcoming function, as a special guest along with her parents. Subbu tells Arya that they will not be coming because they aren’t worthy of being at an event of his social status. Arya prepares to leave, but Anu agrees to come and hands him the cheque. Arya leaves with his entourage with a smile as he sees Anu waving back at him, from the window.

Later during the day, Subbu tries to make peace with Padma, but she refuses to talk to them about anything. That’s when Anu tries to woo her by complimenting her on various aspects. They indirectly ask her to make her popular alam-tea, and Padma goes to make it without talking to them. Anu promises to fulfill all her wishes and hugs her mother. Mr Jende reminds Mira to send a special invitation to Anu and her family.

EXCLUSIVE: Happy Being Reel And Real-Life Heroine: Sudha Chandran On Being An…