In the latest episode of Prema Entha Madhuram, Anuradha meets Aryavardhan when he asks for a lift, and her auto stops. Read the full update here. 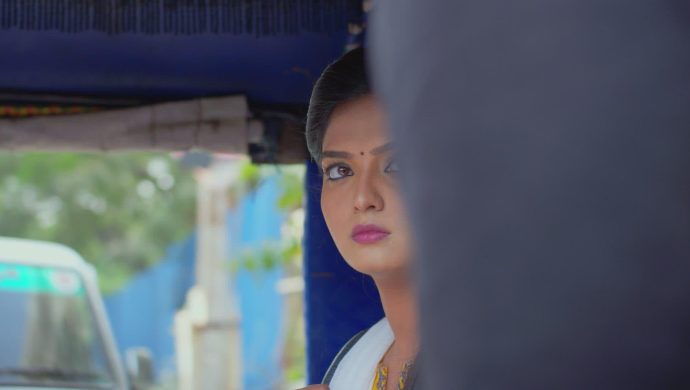 The latest show on Zee Telugu is titled Prema Entha Madhuram, and is the story of Aryavardhan and Anu. In a fictional world, Aryavardhan is the 40-year-old business tycoon who wants to change nothing about himself or in his life. On the other hand, Anu is a 19-year-old young girl who embraces the day with open arms. Fate has unusual plans for them, and when the two cross paths, they fall in love. But how will they defy all odds and find a happily ever after?

Watch the first episode of the show here:

In today’s episode, Anuradha or Anu practises her speech on the terrace as she puts the washed clothes to dry. Her mother, Padma or Paddu searches for a soap bar and sits down when she finally gets her hand on it. That’s when a nomad woman stops by her doorstep and calls Padma outside. She informs that her daughter’s life will take a huge turn, cautioning her. Anuradha comes down and tries to practise her speech as she helps her mother in making the chapati. Her father, Subramanium or Subbu comes to her and gives her a word of motivation.

Subbu prepares to leave the house for work, without having his breakfast. Padma runs behind him with Rs. 50 and asks him to have breakfast on the way to work. She goes back home and prepares the lunch box for Anu and Subbu. As Anu prepares to leave, Padma gives two carriages to her daughter and asks her to drop one by her father’s shop. In another office, a lady named Mira instructs everyone on what was to be done. She takes pride in being the one to decide what sir aka Aryavardhan is supposed to do during the day.

Just when Mira believes that Aryavardhan or Arya would be late to the office, and prepares to cancel the college function, he alights from his personal chopper. He asks Mira to give him a low-down about the day’s schedule. And when Mira skips on the college function, Arya reminds her. Another man, named Jende, asks Arya about his chosen car for the day. But Arya refuses to take any car because the fine for breaking a signal had not been paid by his assistants. In Subbu’s shop, three women enter to garner some entertainment while their car was being repaired.

The three women have a large glass of juice, make Subbu wear a saree and even laugh at him. Anu sees this, and when the ladies walk away, she expresses her disappointment to her father. But he laughs it off and asks her to take it lightly or else her speech would fail to make any impact. He also hands her Rs. 50 to travel by an autorickshaw so she wouldn’t have sweat or drain her energy in public transport. Subbu’s boss, who had passed by when was wearing the saree, tells Subbu to be more careful with his job and avoid entertaining such women.

Anu gets an auto and asks him to stop when the meter turns Rs. 50 so that she could concentrate on her speech. Arya, who decided to avoid cars, takes his bicycle and starts riding towards the college. However, the bicycle suffers a puncture and he starts looking for an alternative. That’s when he asks for a lift, and Anu’s auto stops by him. Anu and Arya look at each other.

No 1 Kodalu 11 February 2020 Preview: Sundaram Goes To Bring Her Back