In the latest episode of Prema Entha Madhuram, Arya shows Anu her new desk in the office and asks her to work well. Read the full update here. 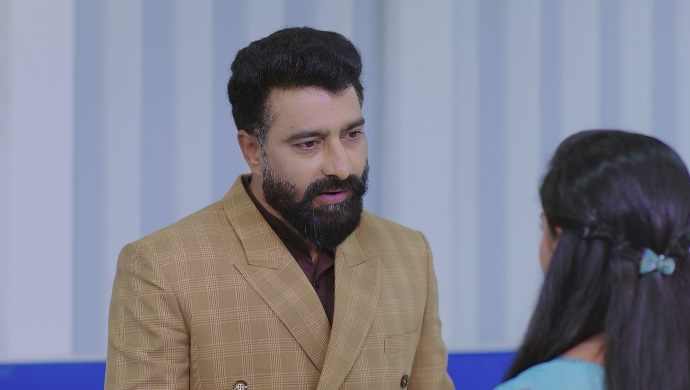 Earlier in Prema Entha Madhuram, Padma talks about leaving the house, out of frustration, and Subbu asks her to go ahead. Anu settles the matter between them, and Subbu explains why the proposal wasn’t good for Anu. Rajini’s brother comes back and gives an explanation for his behaviour, while also asking Padma to believe that their wedding will take place. Ramya comes to tell Anu that Rajini’s brother is using her as a bait to get money from Arya.

In today’s episode, Jende brings the letter to Arya and he hands it over to Mira. She refuses to open it but Arya insists. That’s when Mira finds out that she has been promoted to the Vice President’s position, and her position is being taken over by someone else. Mira wipes her tears and thanks Arya for the opportunity. Arya tells Mira to stop doubting herself and work harder. Mira promises to do it and asks about her new subordinate, and Arya asks her to wait.

Subbu gives an idol of Lord Ganesha and asks her to perform a small pooja before starting with the work. Raghupati’s son, Satyam, feels shy as he wishes good luck to Anu. Her friend, Ramya, wishes her the best and asks her to impress Arya with her work. Anu’s sandal breaks a few moments before entering the office, and she wonders what bad omen it was. Mira belittles Anu upon seeing her and gets furious when she finds out that Mira is her new assistant.

Arya asks if Jende and Mira welcomed her well, and Anu nods approvingly. Arya takes Anu to her new cubicle, which happens to be the same one where Mira started her career. Arya asks Anu to believe in herself and mingle with people because work will keep happening anyway. Anu waits for them to go and rejoices upon seeing the desk all to herself. She lights up a few incense sticks and prays to god. In a few minutes, the fire alarm starts ringing, and everyone runs out of there.