PLOT TWIST: Will It Be Vasundhara Or Nakshatra For Vamsi After Koya Dora’s Predictions??

Vamsi and Vasundhara were about to start afresh. But a koya dora arrived to change the entire plot. What happens next in Maate Mantramu? 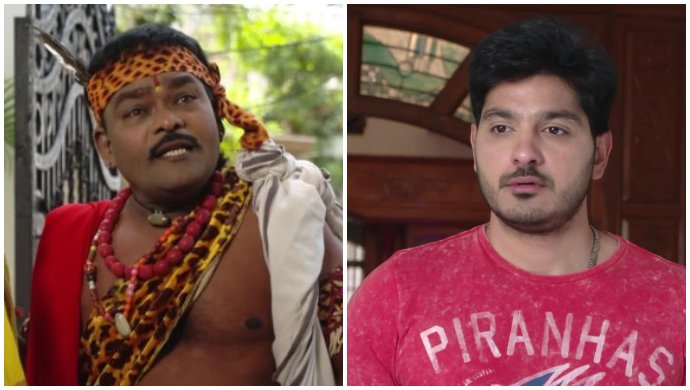 Fans of the Telugu TV show Maate Mantramu were just starting to be happy about Vamsi and Vasundhara‘s union. But happiness doesn’t seem to last long. Recent developments in the show have taken us back into the dark spot. Will Vamsi be able to start a new and happy life with Vasundhara, the girl who loves him and the one he deserves? Or will he settle for his mardal Nakshatra, the girl who has no emotions for him but only loves his wealth? Watch the latest episode here:

As we know, Vamsi and Nakshatra’s engagement ceremony witnessed a sudden change of events when Vamsi put the ring in Vasundhara’s finger instead of Nakshatra’s. This stirred up drama in the Kakarla family. While Vamsi was secretly happy and his mother, Suchitra Devi, couldn’t stop expressing her happiness, Nakshatra and her mother Ayirendri tried their best to nullify their engagement.

Even though a few days have passed, Nakshatra and her mother have not stopped scheming to get Vasundhara out of the picture. Along with help from Vasundhara’s grandmother, Kantamma, the mother-daughter duo pay a man to dress up as a koya dora (gypsy) to come and turn the situation in their favour. A few hours later, the koya dora arrives at the Kakarla house. Here’s how things go down:

Suchitra Devi is the first one to hear him. She comes out and tells the dora that she will be back with kanukalu (gifts). The dora rejects it and tells her that he is there to convey the message of amma (goddess). He starts by telling Suchitra Devi that the house has a curse and unless they treat it, everything they have will turn into ashes.

Suchitra is heartbroken to hear this. Ayirendri is hiding inside the house, eavesdropping on the conversation. She is happy to see his acting just for Rs 10,000. The koya dora asks Suchitra if she has been trying to change the fate of her son. He says that though she managed to arrange the wedding, the girl next to Vamsi isn’t the one who is supposed to be in that place. Suchitra is thrilled to hear this. She tells him that Nakshatra is, indeed, not the person meant to be Vamsi’s wife. She calls Vamsi to hear this news himself.

Vamsi comes out, along with Ayirendri and Nakshatra, who were hiding inside all this while. They tell the koya dora that he must stop his nuisance and leave. But Suchitra insists that he stay and tell the truth and Vamsi, too, asks the mother-daughter duo to stay quiet. The koya dora tells Vamsi that whatever happened on the day of his engagement wasn’t what amma (goddess) had planned.

The koya dora asks Vamsi why he made the mistake of getting engaged to another person while the right girl was standing right next to him, hinting at Nakshatra. He says since the hand (with the engagement ring) has changed, so will his fate. He tells Suchitra that by getting engaged to the girl he likes, Vamsi has called the wrath of the gods upon his family. Nakshatra and Ayirendri are finally relieved to hear this.

The koya dora tells Vamsi that if he sees the girl (Vasundhara) again he will be tied to her for life. Suchitra tries to explain that it is all for Vamsi’s good and Vasundhara is the right girl. But the koya dora insists that amma (goddess) has sent him to warn Vamsi regarding Vasundhara.

Before taking leave, the koya dora tells Vamsi that he has the blessing of amma (goddess). But he must be wise before tying the knot with anyone. Although Ayirendri calls him fake, is he really a fake koya dora? Will Vamsi leave Vasundhara after hearing this? Or will he really see what his mother has been trying to tell him? Watch this space to know.

Until then, stay up to date with Jai and Manga’s blooming love story in Kalyana Vaibhogam on ZEE5.

REVEALED: Here's The Real Side Of Kartik, The Man Who Married Meenakshi