PLOT TWIST: Nithya Joins Hands With Chandrika And Her Husband To Kill Manga

She has survived several murder attempts. But will it get tougher for the character played by Meghana Lokesh now that these three are together? 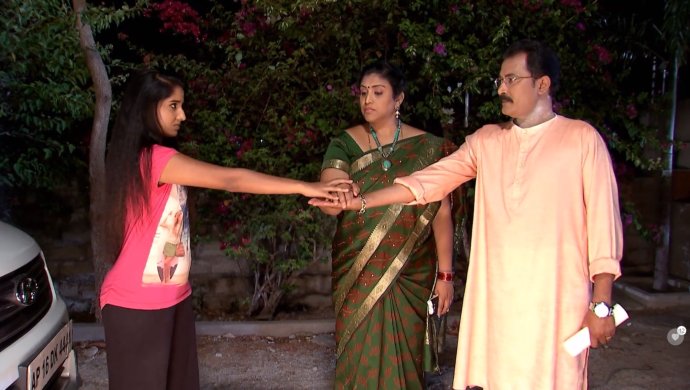 Something that you didn’t see coming has happened! And no matter who you had been rooting for all along, the tables could be turning soon in the Telugu serial Kalyana Vaibhogam. The prime-time show revolves around the lives of two lookalikes, Nithya and Manga (both played by Meghana Lokesh), who love the same man, Jai (played by VJ Sunny). Given the generational curse in Jai’s family, Nithya had swapped places with Manga and gotten her to marry Jai. But now she is trying to get back to Jai’s life and win his love. Nithya has proven that morality and ethics do not come in her way once she has decided to get something. In the episode dated May 21, 2019, Nithya has taken yet another step.

The biggest plot twist now is that Nithya has joined hands with Chandrika and her husband to kill Manga. Previously, Nithya had tried killing Manga in a car accident, kidnapped her, even tried to shoot her at point blank range. But all attempts had failed. Post Manga’s marriage with Jai, Nithya had been waiting for her to die because of the generational curse, as were Chandrika and her husband. Manga managed to escape three incidents that could have killed her on the day of the Amavasya when this curse was the strongest.

Just like Nithya, Chandrika, too, has tried to kill and cause inconvenience to Manga multiple times. Her plans were either never executed or failed right in the beginning. But her determination to kill Manga has been growing stronger by the day. Now that the three have come together, Manga’s life is in more danger than ever before. But we believe that she will not be defeated by the curse or the three villains. Manga and Jai’s love for each other will prove to be stronger than their jealousy and evilness.

This union is dangerous for Nithya as well and that is something she hasn’t thought about. At the moment, Chandrika and her husband have no qualms about Manga and Jai being married. Nithya has made them their allies without considering their point of interest — which is to marry their daughter to Jai after killing both Manga and Nithya. Who is really in danger now? Let us know your thoughts below.

Maate Mantramu 21 May 2019 Preview: Vasundhara Gets Kidnapped. Will Vamsi Save Her?

6 Scenes From Ram Charan And Rakul Preet's Bruce Lee: The Fighter That Are Incredible