Know all that happened under the same roof when your favourite Zee Telugu couples gathered for a fun time. Read here. 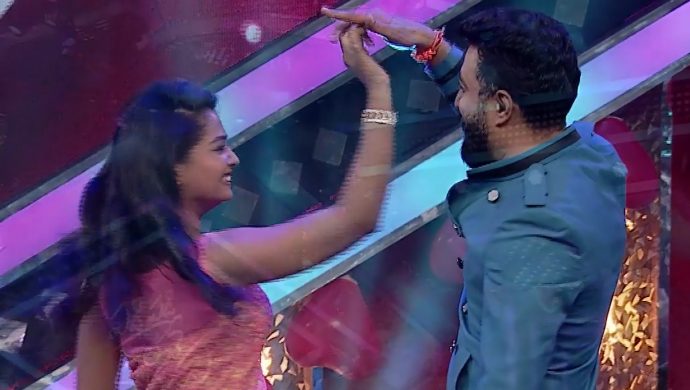 Zee Telugu’s special event, titled Padi Padi Leche Manasu, made everyone’s Valentine’s weekend even better. Hosted by VJ Sunny and Meghna Lokesh, this event saw the presence of all the popular couples of the channel. Each of them brought a special performance to the table and made the evening highly entertaining. If you failed to watch the show, fret not! Because we have got your dose of entertainment covered. Read below all the highlights from the event.

You can also watch the show here:

The evening started with many sweet performances. Sidhu and Pranavi of Ganga Manga set the tone of the show right with their performance. Sunny and Meghna welcome each of the couples with a teddy bear, a box of chocolates and a red rose. Kalki Ram, Pooja, Deepthi and Gokul also made a classy entry.

Once the pairs started settling in, Gully Boyz came in as a couple and took their time ragging each other. Later during the show, they also insisted on sharing their love story. They say it all started when she left the bhaji-stall without paying, and he had to catch up with her to take the money.

Television audience’s heartthrob Akarsh, who plays Aditya in Attarintlo Akka Chellelu, announced that he is committed and brought his long-time girlfriend, Aishwarya Raj, to the stage. They performed a small dance number in perfect sync while they got lost in each other’s dreamy eyes.

Initially, Ninne Pelladatha’s Anusha entered the show alone, because Prathap was too busy working. However, to her surprise, he joined Anusha in a few moments by signing a sweet song. They also danced together. Knowing the couple’s chemistry, we will insist you catch their performance.

The hosts also welcomed the new couples, of Trinayani and Thoorpu Padamara. The actors spoke about their respective shows and showed their excitement to be a part of the Zee Telugu family. The lead actors of Choosi Choodangaane also graced the event to thank the audiences for their support.

During the evening, Sunny and Meghna also played games with the couples. In a task that requires the girl to squish and burst the balloon by sitting on the boy’s back – Anusha ended up falling upside down, and Pooja insisted on playing the game with Sunny.

Adding to the entertainment, Roll Rida made a rocking entry. He sang his most popular songs, including OMG Daddy from Ala Vaikunthapuramlo, and Megastar from Bruce Lee: The Fighter.

VJ Sunny took a plunge to sing a song for the girls who have a crush on him. With dim lights and soulful aura all around, Sunny sang Sid Sriram’s Emai Poyave.

Lastly, Pradeep Machiraju came to promote his upcoming film, titled 30 Rojullo Prema Ela?, on this show. He spoke about the awkwardness that came along with not being the host. He also thanked the channel for having his back and pushing him forward in life.

You can watch the full show above, or click here to watch it on ZEE5. Don’t forget to check out all the new Zee Telugu shows on ZEE5, before it aires on TV.