No 1 Kodalu Weekly Update From 9 to 14 December 2019: Vagdevi Is Felicitated

In the first week of No 1 Kodalu, Vagdevi is felicitated at a ceremony for her work in the educational sector. Read the full weekly update here 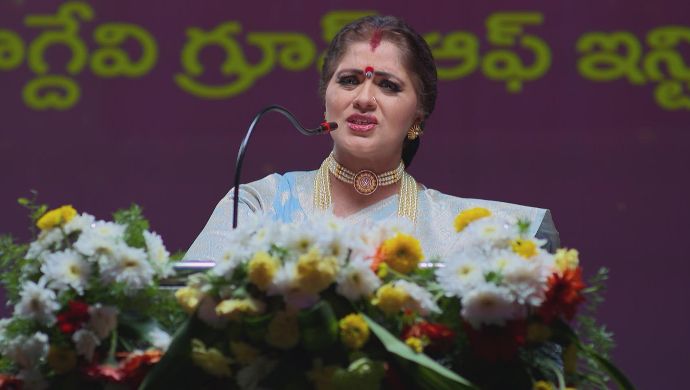 No 1 Kodalu is the newest Zee Telugu show and is the story of two women from different walks of life. There’s Vagdevi, who needs the people around her to be No 1 in whatever they do. Then, there’s Saraswati believes in lifting people above, even if it means having to remain at the bottom. Fate brings them together as Atta-Kodalu. How the journey turns out to be and how the two misfits live with each other is the crux of the story.

Vagdevi’s PA informs everyone about the minutely made day-plan and they get to work. Shyamala reaches the venue and is offended to reach before Vagdevi. Her PA informs Shyamala that Vagdevi is known to be on time, always.

The comparer announces the felicitation of Vagdevi as she walks into the auditorium. She is addressed as the ‘Nritya Mayuri’ (Referencing to Sudha Chandran’s debut film). Vagdevi greets her old teacher, unlike Shyamala, and thanks him for parting knowledge to her.

In the village, all the kids in the school run away when they find out that the ‘vaccination people’ have come. When they all wonder how to get the job done, they call Sarsu aka Saraswati.

Sarsu figures out a way to get the kids injected with the Vaccination – by asking the kids to extend their hands through a window to apply henna. While she speaks to them about their desired design, the nurses vaccinate them.

Because of this, Sarsu is unable to make it home in time, where her cousin is waiting for her to come with the henna. Finally, Sarsu reaches home to see her aunt beat her sister, who is mentally unstable, for breaking the glass.

Vagdevi’s younger son bags a big business project. But his partners are unsure about finding the land needed all on their own. That’s when he decides to cross all boundaries and promises them that he will find the land.

Sarsu sees that an elderly man is left all on his own to have dinner. She goes inside to see that he has dropped his dinner plate. She helps him out and asks him to talk to his kids, because it’s better to have company in old age.

Vagdevi’s elder daughter-in-law cries on a call with her mother in a colloquial accent. She cusses her mother for sending her to Washington and marrying her into Vagdevi’s house. Now, she has to administer a school and get the permissions needed.

In Sarsu’s mother’s Shreemantham ceremony, Vagdevi meets her intermediate classmate, Shyamala. They greet each other and introduce their husbands. Shyamala belittles Vagdevi to be married to a farmer, even when she was a class and college topper.

After the ceremony, Vagdevi, her husband and Sarsu’s parents have a long discussion about going to a city. Sarsu’s parents tell Vagdevi’s husband that he must support her in this endeavour as she aims to grow in life and it’ll be the best for all.

That night, Vagdevi and her husband try to seek blessing and permission from her father-in-law. But instead, he asks them to get out and never return. Vagdevi decides to go out and asks her husband to be the companion that he promised to be.

The couple decides to spend the night at the shore until next morning, when they can take a boat and crossover to the city. Sarsu’s parents see this and asks them to stay the night at their house instead. The next morning, Sarsu’s mother gives her gold jewellery to help them settle down in the foreign land.