No 1 Kodalu Weekly Update From 6 To 11 January 2020: Rahul Meets His Grandfather

Last week in No 1 Kodalu, Rahul opens up about his identity to Sarsu and she helps him meet Peddayyina. Read the full update here 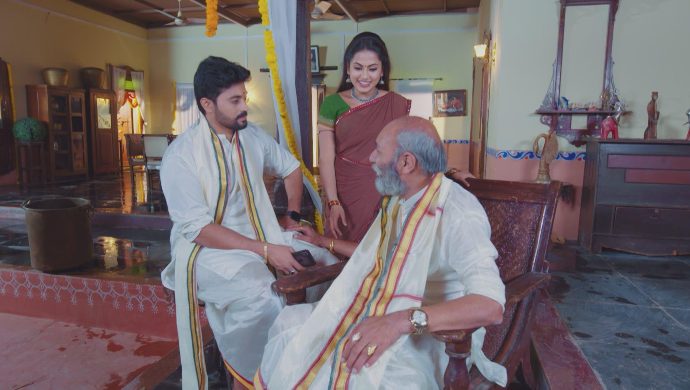 In the week before the last in No 1 Kodalu, Rahul lands in Mahendravaram, by lying about it to his mother. He meets Sarsu on the way to Mahendravaram, and they end up fighting for silly reasons. Rahul sets up a tent right opposite to his grandfather’s house. Sarsu asks him to help with locating a house in the city, and he asks her assistance in talking to the landowners. Impressed with Nikki’s academics, Vagdevi offers a brand new project to her as a manager. This makes Vanaja cry out loud because she loses her only hope.

In flashback: Sarsu gets up early to complete the household chores. Her uncle comes to her and starts scolding her. He also winks at her to suggest that he is not serious about anything. Sarsu’s aunt, impressed by Sarsu’s work, turns back on her word and allows Sarsu and her sister to stay in her house.

Present-day: Sarsu goes to scold Rahul for following her the other night when she finds out his family photo. She confirms if he is Vagdevi’s son, and goes to Peddayyina to give him the good news.

Rahul starts staying in Peddayina’s house, and the next day happens to be his birthday. Peddayyina turns the whole day into a celebration, with special meals and pampering sessions for Rahul.

At Vagdevi’s house, Teja confronts his father, Arunbabu, about his reasons for abandoning his father (Pedayyina). But Arunbabu explains that he has been away from his father, because of what he did to Sarsu’s parents.

Vanaja and Maggi’s mother comes to meet Vagdevi, with costly gold jewellery. She showered endless compliments on Vagdevi and hoped that she would agree to marry Rahul with Maggi.

In flashback: Sarsu’s uncle finds a way to enrol her in a school. However, one the first day of her school, Sarsu runs out of her classroom because someone tells her that Chinni has been walking aimlessly in the village.

Present-day: Sarsu comes home from Peddayyina’s home, to find Chinni sitting under in the dark. Sarsu sees Chinni crying because of hunger and the inability to bear with it.

The next day, Vagdevi takes Vanaja for an event, where Vagdevi boasts about Vanaja’s academic excellence. They meet yet another student from Harvard, who refuses to recognise Vanaja as her batchmate. Vanaja starts worrying about how Vagdevi will deal with her when they storm off to go home.