In the third week of No 1 Kodalu, Sarsu goes to meet Arun Babu and Vagdevi But she gets kicked out by the security. Read the full weekly update here 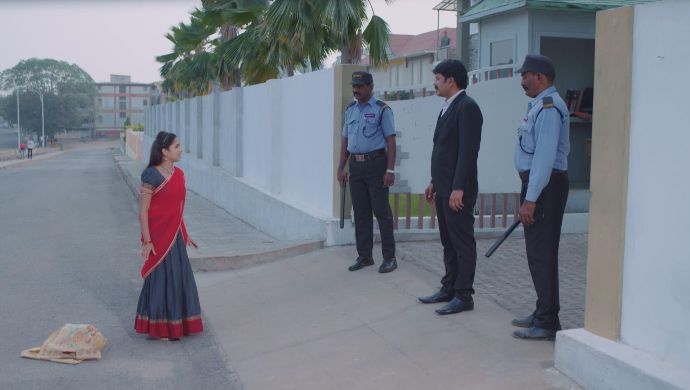 In the last week of No 1 Kodalu, Vagdevi left the house with her husband and children, to achieve something bigger, against the will of her father-in-law. She starts her own school and grows tremendously in the years that follow. However, during this time, she gets extremely caught up with her work and forgets everything else. Uma (Sarsu’s mother) has complications with the delivery of her younger sister, and she passes away right after the new baby is born. Her father blames Vagdevi’s husband for being unable to help the one time he needed her. This ruins the relationships between everyone. Years later, in the present day, Sarsu tries to save Peddayinna by speaking to Vagdevi. However, she gets scolded by Vagdevi.

Rahul sets up a tent opposite his grandfather’s house. He thinks of ways to talk to Pedayyina and convince him for the land. That’s when he sees Sarsu talking to everyone in the house, and decides to take her help.
She agrees to help him if he agrees to take her to the city – so she could meet Arun Babu and convince him to come back to the village and meet his father. They have a deal. The next day, they head to the city.
Vagdevi asks everyone to be present at home, and maintain the decorum when her foreign delegates come to meet them. However, Arun Babu hosts a small pooja for Uma’s death anniversary. This move irks Vagdevi and she tries to argue, but Arun Babu reminds her that all of her wealth is ‘donated’ to her by Uma.
In the flashback: Arun comes back from the hospital and informs Vagdevi that Uma has passed away, because they couldn’t help them. After a few moments of guilt, Vagdevi defends that it was their mistake to have neglected education and ended up facing the brunt of it. But this does not go down well with Arun Babu.
In a few days, Vagdevi calls Arun into their room to talk. She opens a cloth and shows Uma’s jewellery. She tells her husband to return it to them. But Arun says that she cannot get rid of the guilt of someone’s death, so easily.
However, the next day, Arun goes back to his village to mend the relationships. He goes back to his home and is stopped by his father. Pedayyina’s ego does not allow him to forgive his son. This hurts Arun, who says that there will be a day when Pedayyina will cry because of his own deeds.
Later, Arun gives a bag full of money and Uma’s jewellery to Sarsu’s aunt, who promises to take care of them. But it was her greed talking. Her husband sees her donning the jewellery and asks about it. Since she has control over him, she manipulates him to believe that she would do good for them.
Present day: Rahul sees that Sarsu was heading towards his house, and gets out of the autorickshaw. She goes ahead and asks the security to let her in. She even speaks to Vagdevi, who asks her to get out. As Sarsu steps out, she tells Vagdevi that maybe an uneducated person will takeover all that she has.