Maggie insists that Sarsu, who is posing as Buchamma, takes her to the house where Sarsu lives. Read the full update here. 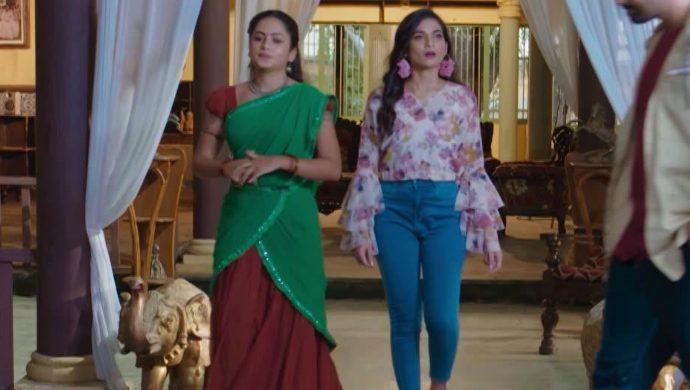 Earlier in No. 1 Kodalu, Rahul (Jai Dhanush) agrees to keep Thayaru as a house help, despite Sarsu’s (Madhumitha) resistance. Maggie (Anusha) gives a glimpse of Rahul’s plan, and finally, Rahul also ends up revealing the truth. Sarsu asks them to have their lunch, curtly. When Gumasta comes to call Sarsu, Thayaru and Maggie step out to see the commotion. But Rahul saves the day by talking to Gumasta first. Later, Peddayyaiah asks them to stay away from the rassam.

In the latest episode, Rahul and Sarsu eat the rassam and cough because it’s so spicy. Sarsu tells them coyly that she must have mistaken one ingredient for the other. In Vagdevi’s house, Teja talks to Ekamabaram and tells him that Vagdevi thinks highly of him. Ekambaram falls into Teja’s trap and tells him that they will be leaving to abroad for work. Teja believes it is best for Ekamabram to stay away from his mother and asks him to change the plan.

After lunch, Maggie asks Sarsu who she thinks Buchamma is, if she knows about Sarsu. When she nods, Maggie requests to take her to Sarsu’s place. Rahul also tags along and midway, he tells Sarsu how he is protecting her and himself by hiding Sarsu’s real identity. On their way, Maggie falls down once and refuses Sarsu’s help. So, Sarsu makes her fall in the muddy pit again. Rahul offers to help Maggie by turning on the water motor, which Sarsu refuses to start.

Meanwhile, Maggie asks a man for Sarsu’s home address and starts walking towards it. Rahul and Sarsu find out about Maggie’s location from the same man and start following her. Thayaru, who had been following them all along, gets a call from Kanchayini. She tells Kanchayini that in a few minutes she will find out who Sarsu is and will kill her.

SHOCKING! The Latest Developments In Kalyana Vaibhogam Will Leave You Captivated

Poll: Who Is The New Maid In Brahmini’s House In Ninne Pelladatha?