In this episode of No 1 Kodalu, despite Sarsu's resistance, Rahul agrees for the gun-woman to stay with them as a maid. Read the full update here. 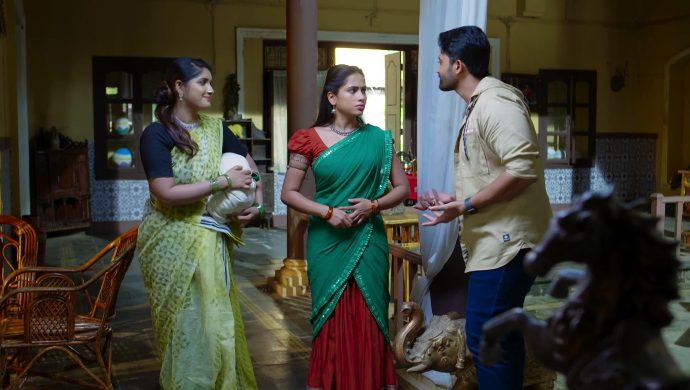 Earlier in No. 1 Kodalu, Kanchayini tells the gun-woman that she was aiming at the wrong person. Rahul (Jai Dhanush), Maggie (Anusha) and Sarsu (Madhumitha) come home. Rahul requests Peddayyaiah to hide Sarsu’s identity from Maggie to avoid any further problems. Peddayyaiah laughs when Sarsu expresses her anger towards Maggie’s closeness to Rahul. Later, the gun-woman reaches Peddayyaiah’s place.

In the latest episode, Sarsu moves through the house when she feels someone standing behind. She turns back to find the gun-woman standing in front of her. Sarsu enquires about her, and the girl asks for some work. Sarsu tells her to leave as there is no work. The girl then asks Rahul for a job, and the latter agrees to her being a house-help. She introduces herself as Thayaru.

Thayaru goes inside the house and Sarsu scolds Rahul for allowing random people in their lives. Kanchayini calls Maggie and asks about Rahul. That’s when Maggie shows Kanchayanini the blueprint of Rahul’s factory. Rahul sees this and tries to stop her. But Maggie insists Rahul on talking to her mother. So, Rahul lowers his guards and shares the plan. He talks about how his factory plan could increase the value of the land manifold.

Sarsu appears to have heard it all and angrily asks them to eat their lunch. Maggie expresses her dislike at Sarsu’s tone, but Rahul asks her to get used to it since she is valued by Peddayyaiah. Thayaru tries to hide her gun somewhere when the Gumasta starts calling out for Sarsu. Thayaru and Maggie come out in hope to find out who is calling Sarsu. But Rahul saves the day by explaining the situation to him. Rahul also sends Maggie away who had come to see Sarsu.

Sarsu finally comes to the Gumasta and asks him why he was calling her. But he goes straightaway to Peddayyaiah. Sarsu looks angrily at Rahul but does not say anything. Maggie tries to get close to Rahul during lunch. Peddayyaiah asks Gumasta to join them for the meals. That’s when the Gumasta makes an observation that Sarsu has been angry since the girl came to their village. Later, Peddayyaiah asks them to stay away from the rassam.

No 1 Kodalu 27 June 2020 Preview: Maggie Insists On Eating The Rassam