In this episode of No 1 Kodalu, Sarsu starts crying because she worries about raising Chinni as a woman now. Read the full update here. 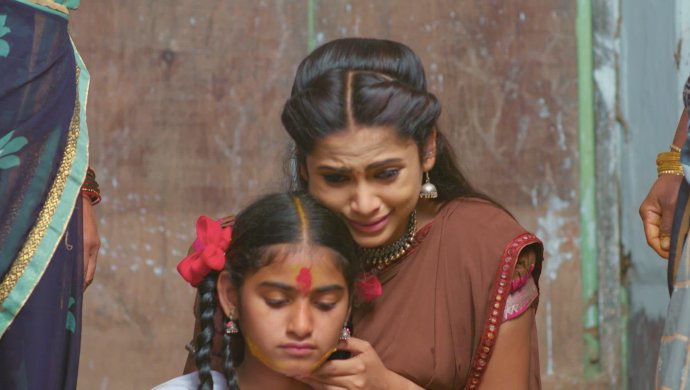 Earlier in No. 1 Kodalu, Sarsu goes to meet Nagamani and ask her to come for Chinni’s pooja. But Nagamani and Prabha demean her once again and drag her out. This time, Rahul comes to her rescue and let’s the two ladies know that he is here for Sarsu and Chinni. He holds her hand and takes her away. Vagdevi talks about Navya’s wedding once again and finds out about Arunbabu’s desire to marry off Sarsu. He also announces his visit to Mahendravaram for the same.

In the upcoming episode, Sarsu stands close to the door, waiting for Nagamani to come, but she doesn’t. The other ladies helping her out, tell Sarsu that she mustn’t look forward to Nagamani’s negative energy around Chinni. The ladies get busy discussing who will do which work when Rahul steps into their conversation and offers to take the load. Since Sundaram and Madhu were out of town, Rahul offers to become Chinni’s bava and calls the elderly lady as ‘Pedda atta’.

The ladies are impressed with his selflessness and appreciate him for his decision. As Rahul picks up various things and ensures that things are being done well, he also cracks jokes to keep the environment light and full of laughter. The ladies help Chinni in sitting comfortably on the freshly woven mat and ask Sarsu to add a white dupatta to Chinni. As she does that, Sarsu starts sobbing endlessly.

When the ladies ask for the reason behind it, Sarsu explains that her sister is too naive to understand this cruel world. Now, she has to take care of herself and of Chinni, round the clock. The ladies comfort her by assuring that they will look after Chinni as one of their own, and never let her be harmed. The ladies start to leave when Peddayyina calls Rahul. Sarsu feels too shy to tell him what has happened, and Rahul extends the good news to his grandfather.

Peddayyina feels happy knowing that Rahul has been standing like a backbone to Sarsu in such times. Nagamani tells Prabha about her plan, and concludes by saying that they mustn’t make any move until things become normal after Sundaram, Madhu and Peddayyina return. As Rahul takes leave, Sarsu breaks down again and asks Rahul if she would be able to deal with the change in things all on her own. Rahul confidently assures her.

Maggie sees Vanaja and Navya dancing in the living room with their earphone on. She stops them and cautions that Vagdevi could walk in anytime. But Navya asks her to let go of the inhibitions for some time and join them. Maggies joins them and asks how could one be so happy for getting married. Navya explains her part when Vanaja adds that she is most excited about this marriage only because she will get to wear all the jewellery made by her mother.