In this episode of No 1 Kodalu, when Rahul does not stop annoying her, Sarsu gives up and starts talking to him again. Read the full update here. 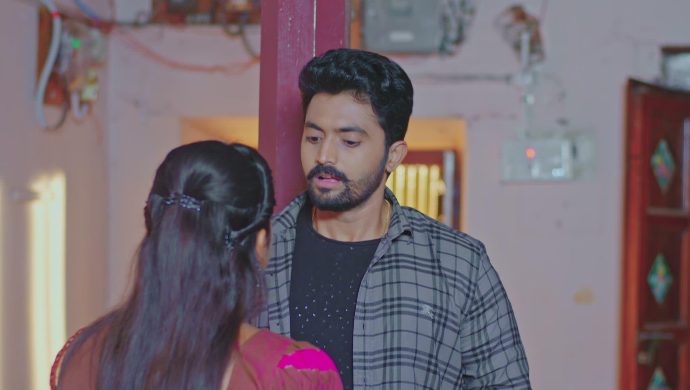 Earlier in No. 1 Kodalu, Sarsu falls to the ground a moment before Rahul comes to her rescue. Sarsu insists on completing her pooja, but Peddayyina asks her to take Rahul’s help. And that’s how they completed it. Vagdevi keeps wondering if Teja visited Mahendravaram. Ekambaram tells Vagdevi that he saw both, Rahul and Teja, in Mahendravaram. He also adds that he saw his late parents. Prabha shows the video to her mother and tells her to find a way to bring Sarsu back so that she couldn’t rule over them, by marrying Rahul and becoming the chief of the village.

In the upcoming episode, Rahul holds Sarsu as he brings her back home. Peddayyina asks him to go back home while he decides to stay because Sarsu shouldn’t be left alone in such a condition. The next day, Kartik asks his mother, Vanaja, to help him with the Math problems. But Vanaja tries to get out of the problem, and that makes Kartik wonder if she really knows how to do the math. Maggie makes fun of Vanaja and asks her to be careful.

Teja comes back home and apologises to everyone for going away without informing prior. When Arunbabu asks him about his teacher’s health, Teja tells his father how the old man wants nothing but to stay close to his family. During lunch, Rahul thinks that he should act in a way that would impress his grandfather. So, he decides to take lunch for Peddayyina, Chinni and Sarsu. He takes the carriage and tells Peddayyina that he was constantly concerned for them.

Peddayyina tells him that it is his time to return the favour, and take care of Sarsu. He asks Rahul to Sarsu while he feeds Chinni. Later, Peddayyina starts feeding Sarsu and she feels sad to see Peddayyina work hard for her. But she falls asleep again, soon. Later, when Sarsu feels better, Rahul presses her on answering why she wasn’t talking to him like she used. This annoys Sarsu and she starts talking back.

Who Wore What: Shruti Haasan Dazzles In An Emerald Green Ritu Kumar Saree