In this episode of No 1 Kodalu, Sundaram gets angry on Nagamani for not informing about Chinni's function and slaps her. Read the full update here. 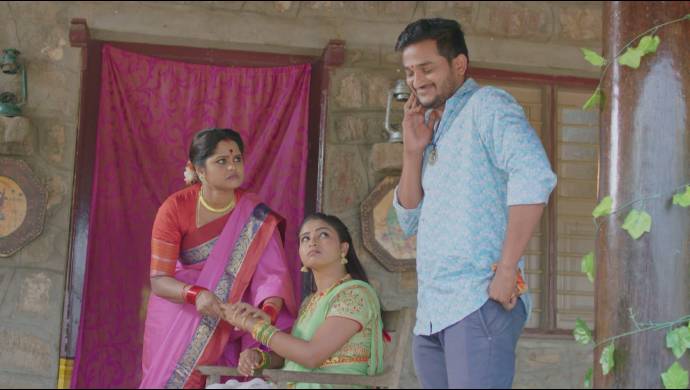 Earlier in No. 1 Kodalu, Sarsu proceeds with Chinni’s function when she understands that Nagamani, Prabha or anyone would not come to her house. Rahul brings Sarsu’s mother’s mangalasutram again and scolds her for keeping him and Peddayyina away. Kanchayini comes home to meet her daughters. They tell her about Navya’s wedding, and even Harsha comes to meet Navya at the same time. They find out that he does everyone on his mother’s command.

In the latest episode, Harsha expresses his desire to meet with Navya. Vaghdevi tells them both to talk in the garden. Meanwhile, Chinni is scared and asks for Sarsu. Sarsu comes and asks Chinni to be calm and goes on to greet everyone at the function. The priest asks her about her uncle and aunt who are supposed to do the ‘hommam‘ to save Chinni from the ‘Prana Gandam’.

While Prabha is dancing happily, Nagamani abruptly stops the song and scolds her. She tells her to behave as the groom’s family is coming to visit her. She gives all of Sarsu’s jewellery to Prabha and asks her to wear them. Prabha wears them in a hurry as her father returns home and questions him. Nagamani warns Prabha to not tell her father about Chinni’s function. Nagamani’s son walks him and jokes about her sister. Sundaram is shocked to know about the marriage alliance which he was unaware of. Nagamani convinces him and moves ahead with the preparation.

The groom’s family comes to their house and are warmly welcomed by Sundaram. After impressing them with the initial hospitality, he invites them inside the house. Meanwhile, Sarsu decides to go invite Sundaram and Nagamani once again. Her relatives also follow her.

Navya and Harsha have a great time talking to each other, however, Vaghdevi comes to talk with Harsha. She informs him about the marriage dates that she wishes to communicate with his mom. He agrees to this and calls her ‘No.1’ which shocks her, but he praises her saying she is No.1 and leaves in a hurry. Back at Sundaram’s house, the groom’s family meet Prabha. Nagamani begins to praise her daughter, hearing which her son makes a joke that angers Nagamani.

However, this meeting is interrupted as Sarsu comes searching for them. Nagamani stops her outside and scolds her for coming again. Sarsu requests them to come to the function and blames her for trying to spoil Prabha’s marriage alliance. Sundaram comes outside and asks her to come in. However, Nagamani continues to blame Sarsu. Sarsu informs Sundaram about Chinni’s function. Initially happy, he asks why Nagamani didn’t inform him earlier. As She bad-mouths Sarsu, Sundaram slaps her.

Nagamani begins to shout in anger due to which, the groom’s family also come outside. Sarsu’s relatives narrate the whole incident to Sundaram. This prompts Nagamani to get agitated. She taunts the relatives as well, who in return scold her for being too rude to Sarsu. Watching all this, the groom’s family walks away from this alliance. Nagamani is infuriated and walks away in anger. Sundaram tries to pacify Sarsu who is sad, however, she decides to convince Nagamani too.

No 1 Kodalu 09 March 2020 Preview: Nagamani Expects Something In Return From Sarsu