In this episode of No 1 Kodalu, Vagdevi surprises everyone by pouring out her love for Arunbabu out in the open. Read the full update here. 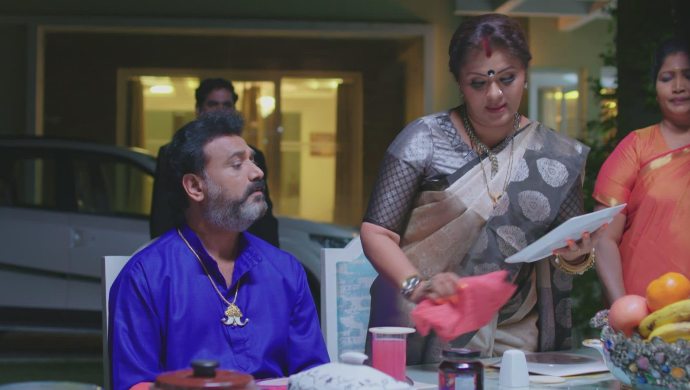 Earlier in No. 1 Kodalu, Shyamala comes to Vagdevi’s house, after deciding to belittle Vagdevi in every way possible. Vagdevi refuses to wait and welcome Shyamala. She sends Vanaja and Teja instead. Shyamala and Vagdevi stay eye to eye throughout their meeting. Arunbabu tells Navya to be sure about her partner. When Navya and Harsha meet privately, they talk about their contrasting personalities.

In the latest episode, Shyamala approves of Navya, and Navya approves of Harsha. Peddayyina agrees to donate a huge amount of money for master’s Gurukulam. Sarsu makes the master call Vagdevi immediately and invite her for the opening. When Vagdevi agrees to come, he asks Vagdevi to bring along Arunbabu and her family, too. Vagdevi thanks him for calling and expresses all the things she likes are happening at the same time.

Later at night, everyone sits for dinner in the lawn. Vanaja and Maggie pull Navya’s leg by talking about the marriage. Arunbabu insists that Navya should give an answer herself before they take the matters ahead. Navya explains that she followed her father’s advice and spoke the truth in front of Harsha. She adds that he did not seem to have a problem, as neither did Shyamala. So, she finds it a good reason to take the prospects ahead.

Vagdevi feels happy that Arunbabu chose to teach their daughter something good. She gets up to serve food to her husband, and everyone looks at them wide-eyed. As Amma gets elated to see them together, he breaks the silence by stating that he was only acting his part, as instructed earlier. This breaks Vagdevi, but she does not say anything. Everyone else, too, feels sad and broken.

Here’s Why You Should Watch Mammootty-Jagapathi Babu Starrer Raja…

Women’s Day Special: Take A Trip To Culinary Wonderland By Indulging In…