No 1 Kodalu 04 March 2020 Written Update: Navya And Harsha Meet Each Other

In this episode of No 1 Kodalu, during the Pellichoopulu, Navya and Harsha excuse themselves to talk privately. Read the full update here. 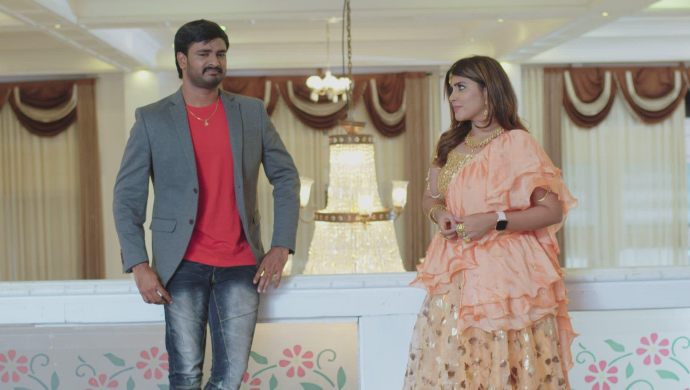 Earlier in No. 1 Kodalu, Sarsu talks to Shyamala about Vagdevi, who suggests that the Schoolmaster must invite Vagdevi himself. When Shyamala’s PA conducts a check-in Vagdevi’s house, Vagdevi talks subtly but also condescendingly. Sarsu goes to invite Prabha for the function, but Nagamani scolds her and asks her to leave, again. Sarsu goes back and prepares for everything on her own.

In the upcoming episode, Shyamala daydreams that Vagdevi and the whole of her family wait outside the house for her. But soon, she snaps back to reality and tells her husband the only incident that stemmed hatred and competition between the two of them. Shyamala lets her PA know that they will be reaching soon, and Arunbabu conveys the same to Ekambaram and Vagdevi, who were busy with office work.

Vagdevi replies that she does not need to be there to welcome her.  Vanaja and Teja can do it. Finally, the couple goes out to welcome Shyamala and her family. They greet each other and go inside. Just in time, Kartikeya switches the TV on and sees the advertisements of Vagdvei’s educational institutions being No. 1. Vanaja switches the TV off and asks her son to greet them, too. Shyamala is taken aback when he calls her ‘Bamma'(grandmother) but lets it go.

Vagdevi and Shyamala greet each other, with a subtle subtext of competition, and decide to be friends like school times. Shyamala’s PA tells her that they need to rush in an hour because they cannot miss a certain meeting. Shyamala asks her PA to postpone it. Seeing this, Ekambaram tries to level up with them and reminds Vagdevi of their meeting. But Vagdevi tells him to cancel the meeting since there will be no meeting without her presence.

Finally, they introduce Navya and Harsha. When asked if they want to talk to each other, Arunbabu excuses Navya to talk to her. He tells her that there should be no lies in a relationship. Later, the two meet upstairs and talk about each other. Navya explains that she isn’t No. 1 like her mother, and is a simple person. Harsha, too, tells Navya that all his decisions are taken by his mother, and she is the best for him.