During the week that was, Veeraswamy and Vasanta stepped out of the Kamineni house to begin a new chapter in their lives. Read the full update here. 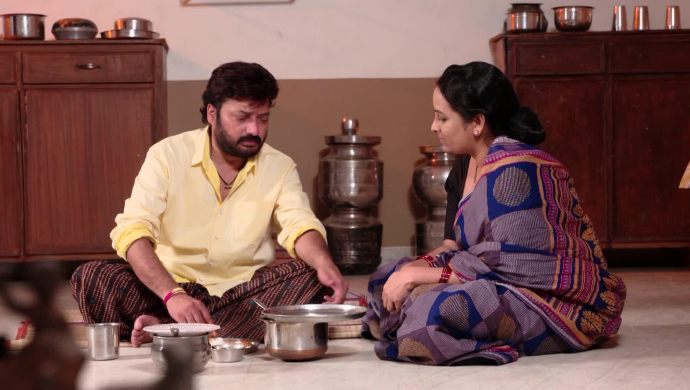 In the Telugu TV show Ninne Pelladatha, troubles only amplify for each member of the family. Mrudula (played by Madhubala) tries to cope with the new work responsibility and finds a way to bring peace with Brahmini. Madhu tries to find a balance between wife and mother. Mansi and Brahmini focus on ruining the upcoming wedding. Sarayu takes every opportunity to take down Mrudula but fails. Tarun has been finding reasons to avoid marrying Sarayu. With Madhu’s help, Veeraswamy became a new person. Here’s what happened in the last week.

Veeraswamy shares dinner with his wife, Vasanta, in the Kamineni house after a long day of work. Just as he takes the first morsel, Sarayu comes in and brushes the plate aside. She insults them and asks them to have some integrity and leave the house on their own.

Mrudula walks in and asks Sarayu to behave. After making Sarayu leave the room, Mrudula suggests, now that they are a happy family, they must move out and settle down on their own. Vasanta hesitates to think of Bharati’s reaction but ends up agreeing.

The next morning, Brahmini starts her day with many calls from the office. With the investors not releasing the complete investment, Brahmini’s company is unable to pay off her current stockholders.

Brahmini asks Mansi to speak to the investors since they are her contacts. Sarayu walks in and tells everyone that the contacts are, in fact, Mrudula’s contacts. Before Mrudula could explain, Brahmini slaps her and shuts her down.

At night, Veeraswamy comes back home from work and sits with his wife for dinner. The two talk about how their daughter and son-in-law have changed their terrible lives into something worthwhile. He starts reeling in joy at Mrudula’s success.

Veeraswamy suggests inviting Madhu and Mrudula to their new house for a full meal and gifting them with new clothes as katnam. He even suggests cooking fish dishes for Madhu since that’s his favourite.

Arjun tells the lawyers to prepare the papers for transferring the wealth to Sarayu. Bharati asks for an apology for bringing a situation as such. Tarun overhears the conversation and questions their ideas. Tarun tries to explain the situation and refuses to marry Sarayu.

The next morning, Arjun calls Brahmini and informs that the wealth and property will be transferred to Sarayu on the day when Komali returns to India. On the same day, Sarayu and Mansi’s wedding rituals will start too.

Tarun tries to intervene and stop them from taking this massive decision. Arjun loses his calm and the two men end up arguing. Tarun walks up to Sarayu and asks what was more important to her – the wedding or the property.

Sarayu slyly tells them that just like he respects his parents’ decision, her mother’s decision is equally important to her. Tarun asks if she will not marry him if the property will not be transferred to her. Sarayu tries to push all the blame on Mrudula once again.

Later, Tarun calls his friends and tells them that he will be with them in half an hour. He jumps from his bedroom’s balcony and sneaks out. Mrudula comes finding for him and finds his fallen wallet instead.

Mrudula gets scared thinking about the worst possible outcomes of Tarun’s sneaking out. She thinks that Komali will leave the house again and Bharati will be sad once again. She decides to call Tarun and ask him and return home, for once and for all.

That’s when she finds a bunch of voice notes from him. In the first, he tells Mrudula that he is leaving the house so that his father will stop taking a reckless decision. In the second one, he mentions that Sarayu can have the property only if he marries her and hence, has decided against it. In the last voice note, he expects Mrudula to explain the situation to his parents.

Mrudula leaves the house in search of Tarun while keeping her phone and Tarun’s wallet in the room. Tarun meets Tanaya and tells her that they must get married and not sacrifice their love for anyone. Tarun tries to tell Tanaya how Sarayu has been the weed in his family, ruining everyone and everything.

He tells Tanaya that they must get married in order to keep the family together and happy – or else he would die. Tanaya agrees and they leave. At home, the lawyers require Tarun’s signature and Arjun asks Mansi to call him out.

ZEE5 Original Film Ala Is A Refreshing Watch Meant For All Youngsters, Watch It Now