Previously, in Ninne Pelladatha, Mrudula is left with only a day to win her place in Madhu's heart again. Read the full weekly update here 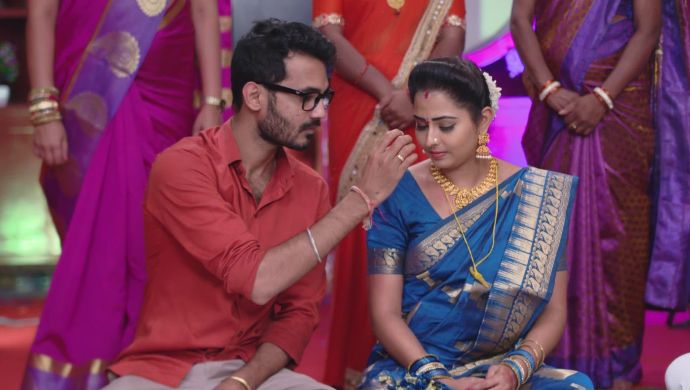 Earlier, in the Zee Telugu show Ninne Pelladatha, Mrudula reveals her true identity and after a lot of fight, Brahmini allows her a week to win back Madhu’s heart and stay in the house. If she fails, she will have to leave everyone and everything behind. Gaurav welcomes them inside the house and tells Mrudula to fulfill her dream now. Bharati slaps Prajwala when she tries to trash-talk about Mrudula. Mansi gives Mrudula an ultimatum to stay away from her. Gaurav joins Mrudula and Madhu’s company. The first day, he tells the liftman to repeat the ‘Pokiri lift scene’ to help Madhu and Mrudula come close to each other.

Mansi touches the wrong switch while ironing her clothes and is electrocuted. Mrudula hears Mansi’s screams and rushes to her room. Mrudula somehow gets Mansi away from the electric current and tries to get her back to consciousness.

Everyone else in the house gathers around Mansi and try to help her. Finally, Mansi comes back to consciousness and is touched to see everyone around her. But more importantly, she realises that she would have been dead if Mrudula did not save her.

Mansi holds Mrudula loving and tells her that they should start preparing to go to their parents’ house. Mrudula starts crying happy tears and Mansi hugs her.

During the pooja, the priest asks for yet another couple to join Gaurav and Mansi. Mansi upfrontly suggests Mrudula and Madhu’s name. Although disinterested, Madhu has no option but to join her.

Towards the end of the pooja, Mansi appliest pasupu and kumkuma to Mrudula’s mangalsutra and this makes her extremely happy to know that her sister wants the best for her now.

At night, Mansi tells Gaurav that he can apply henna to her hands only if Madhu does the same for Mrudula. The two go to Madhu’s room and act as if they are tired of each other and want to get rid of each other to convince Madhu.

Tired of Gaurav’s over-acting, Madhu agrees to do it. He also specifies that he is doing it only for him and no one needs to read between the lines. Yet again, Mrudula is happy to see what Gaurav and Mansi are doing to help her win.

Madhu applies the henna on Mrudula’s hand and Gaurav applies it on Mansi’s hand. Once they are done, Gaurav compares the ladies’ hands and concludes that Mrudula’s henna looks better and hence, Madhu loves his wife more than Gaurav does.

The next day, Mansi makes breakfast for everyone, especially for Mrudula. But when they all sit at the dining table, Mrudula stays away because of Brahmini. Gaurav and Mansi take the opportunity, when their relative visits, and get Mrudula to eat with them all.

Brahmini meets Prajwala and Komali outside. Komali expresses her hatred for Mrudula, the girl who killed her daughter Sarayu. Prajwala too tells Brahmini that she must go away. Brahmini tells them that she has her plan on track and Mrudula won’t stick around.

That day in the office Madhu and Mrudula sit in the cafeteria to work together. They order coffee and end up sipping it from the same mug.