Ninne Pelladatha Weekly Update: Mansi Tries To Kick Sampangi Out Of The House

In the last week, Mrudula as Sampangi tries to help Tarun and Tanaya but it ends up in Mansi trying to kick her out. Read the full update here. 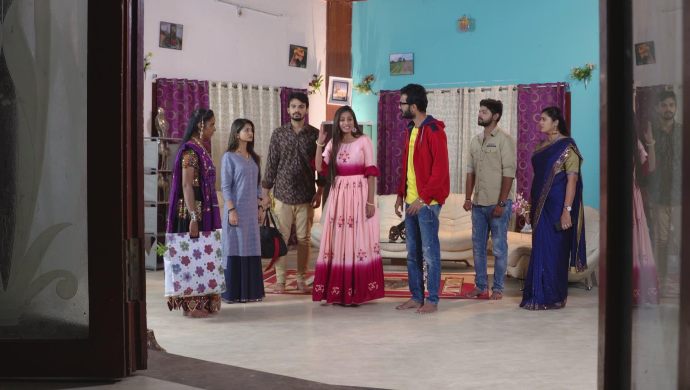 Previously in the Telugu TV show Ninne Pelladatha, Brahmini tells Gaurav and Mansi (played by Sree Priya) to keep everything aside and start a new life together. Sarayu (played by Sarayu Roy) has a fight with Sampangi and Jabilli. Sampangi continues to take care of Madhu (played by Abhi Prathap). Jabilli’s mother, a fortune teller, tells Madhu that Sampangi is the one for him. But they all take it as a joke. While Madhu leaves for home again, Sampangi hugs him and the villagers tell her that she cannot live in the same village anymore. Madhu decides to take her to his house.

Before diving in the past, here’s what is coming up in the future. In the preview for the episode airing on August 20, we see that Brahmini prepares everyone for the Bonala pandaga. But Sampangi sees that there’s no pasupu on her feet and applies it herself.

You can also watch the week in short here. Scroll down to read the weekly update for August 12 to August 19.

Madhu brings Sampangi and Jabilli home. Brahmini and Sarayu are shocked and surprised to see them. Madhu explains that the girls had saved his life and now they have nowhere to stay.

Mansi tells him to pay them and find them another place, but they cannot stay in the same house. Brahmini listens to Madhu and Mansi’s argument and decides to let them stay, as per Madhu’s choice.

Later, since the cook hadn’t come, Sampangi offers to cook and prepares a full meal for everyone in the house. Brahmini is surprised to see these number of dishes that Sampangi put together in no time at all. She takes a bite and compliments her endlessly.

After the meal, Brahmini calls Sampangi and gives her Rs 2,000 as a gift. She hesitates to take it, but Madhu tells her that it’s a gesture and she must accept it.

At night, Sampangi goes to give tea to Mansi but drops a little on her dress instead. This makes Mansi furious and she spills the tea on Sampangi in a fit of anger. Everyone gathers around and tells Mansi to keep a check on her anger.

Jabilli, Brahmini and Madhu meet Sampangi, who is crying on the terrace. Brahmini goes closer to Sampangi and applies ointment on her skin which was burnt by the hot tea.

Madhu goes to the Kamineni house and finds out about the situation there. He turns around and tries to find Tarun and Tanaya. But Sampangi had brought them home already.

Mansi adds fuel to the situation by comparing Mrudula and Sampangi and calling them problem seekers. But anyhow, Tanaya and Tarun find shelter in Brahmini’s house.

In the latest episode (August 20), Bharati and Arjun are sad about their current state. Arjun tells his wife that problems made way into their house only after Mrudula left.

Sarayu finds Sampangi on the street and tries to fight her. But Sampangi’s grip is stronger than she can imagine. Once again, Sampangi warns Sarayu to stay clear of her path.

Read more about this show here. For more drama, watch the latest episodes of Kalyana Vaibhogam on ZEE5.