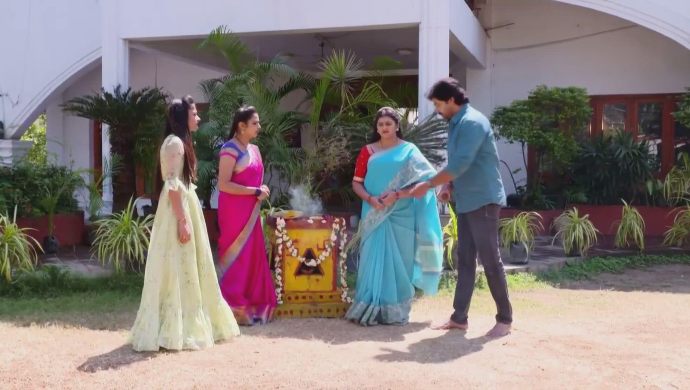 In the week before the last in Ninne Pelladatha, Brahmini and the entire family move to Kanakam’s house, with Krishna Prasad. On Kanakam’s demand, Mrudula welcomes her and Krishna Prasad with an aarti. Later, Kanakam starts throwing tantrums to belittle Brahmini, but Mrudula takes a stand each time. Madhu, too, finds out from the Karimnagar doctor that Kanakam hasn’t been speaking the truth about the death of Mali’s parents. Mrudula asks Kanakam to keep a fast for Krishna Prasad, like rest of the ladies were doing it for their husbands.

Mrudula asks Kanakam to perform the pooja with a piece of camphor lit in her palm. Later, Mrudula also asks Kanakam to break open 1016 coconuts to seek blessings from the goddess, for Krishna Prasad.

Arjun walks back from when he sees a lady, who tells him about Brahmini and Krishna’s Prasad conditions. He comes home to ask Bharati if she has been hiding anything from him. Bharati has no option but to tell the truth.

Arjun storms off to meet Kanakam. Upon seeing her, he  holds her by the neck and scolds her for having ruined his sister’s life. Brahmini comes out of her room and asks him to stop it. They, then, share an emotional moment witnessing the tragedy that their lives have become.

The next day, everyone gathers in the kitchen when Mrudula and Kanakam end up having a heated fight. Kanakam hands Mrudula Rs. 10,000/- and asks for them to be converted into Rs. 10 lacs, in the span of three days.

While everyone is busy brainstorming for ways to make it happen, Gaurav sets off on his own to do his bit. He drives an autorickshaw and even sells ice creams.

That night, Mrudula finds a saree while going through her things. This gives her an idea that they could start a business of their own, and sell designer sarees.

The next morning, Mrudula asks Gaurav to stall Kanakam, so that Krishna Prasad could have a moment with Brahmini. Gaurav takes the hint and starts sneezing. He asks Kanakam the reason why she was headed out and adds that his sneeze has brought bad luck to people who do not stop when it happens.

Outside, Brahmini revolves around the Tulsi to complete her pooja when Mansi and Krishna Prasad join them. Mrudula clarifies that he bought bangles for her. Brahmini takes a pause, but accepts the gift when Mrudula and Mansi insist.

Finally, the four youngsters of Brahmini’s house set up their own business, titled Brahmani Saree Designs, and get ready to beat Kanakam in her own game.

Monday Motivation: Kick-Start Your Week With Rakulpreet’s Belief, Strong Is The New Sexy