Last week in Ninne Pelladatha, Brahmini slaps Madhu because he suggested giving away the land to Kanakam. Read the full update here 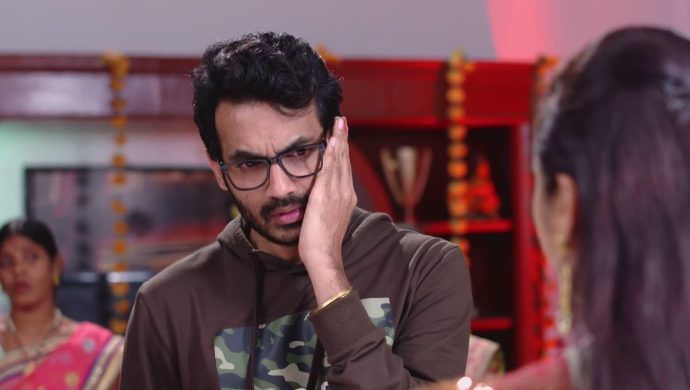 In the week before the last in Ninne Pelladatha, Mrudula walks the flight of the stairs of the temple, on her knees. Brahmini feels moved by Mrudula’s gesture, so she feeds dinner to Mrudula and puts her to sleep. The next day, the latter helps in saving Krishna Prasad from Kanakam’s men. That night, everyone goes to Bharati and Arjun Prasad’s house for Sankranthi. While enjoying the night, Mrudula goes to fetch water from the well when Kanakam’s men light her saree’s veil. Later, everyone sits together and plays a game where they reveal feelings for their respective spouses.

The day after Sankranthi, everyone decides to play games. They divide themselves into two teams, the elders are with Gaurav while Arjun Prasad is with the younger lot. They start betting and start the game with a competitive spirit.

Arjun’s team decides to play skipping, and place a bet of Rs 80,000, against Gaurav’s bet of Rs 50,000. First, Mansi and Bharati go ahead, and Bharati wins the round. Next, Mrudula is sent to play against Brahmini. Once again, Mrudula loses to ensure Brahmini’s victory.

Kanakam meets Mali somewhere outside and expresses her concern. She keeps telling Kanakam that they must return to a peaceful life in Karimnagar. But Kanakam isn’t keen to leave all the wealth that she could get her hands on, for Mali.

They go to Arjun’s house, and Kanakam threatens them to return ‘her’ land. Mali refers to Krishna Prasad, but covers up before revealing anything. Brahmini threatens to get them killed and asks them to leave.

Later, Brahmini meets Arjun and Bharati in their room. They were already sad to know that everyone will be going back to the city. Brahmini checks on them if they need any financial help or support. But the couple gracefully declines the offer and express that they have found a way to manage things.

Despite Mrudula’s objections and attempts to stop him, Madhu takes her along to Kanakam’s new house. He offers the papers to Kanakam, who takes them proudly. However, there is no eye contact or interaction between Madhu and his father.

Brahmini arrives at Kanakam’s residence with Gaurav and Mansi. She slaps Madhu for going against her wishes, for letting Kanakam win over her.

Birthday Special: Shruti Haasan Is A Style Chameleon Like No Other Actress