Last week in Ninne Pelladatha, Brahmini surprised her sons and their wives with a 2-week honeymoon trip. Read the full update here 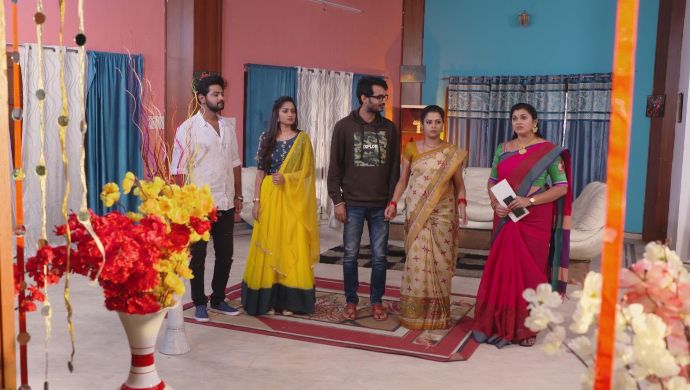 During the week before last, in Ninne Pelladatha, Brahmini offers to pay money to Komali and asks her to leave the house for Arjun and Bharati. Bharati invites everyone to their new house for lunch before Brahmini’s wedding anniversary. The new maid in the house is sent by Prajwala and she mixes poison in the food that’s cooked by Bharati for everyone. Mrudula finds it out when she goes to feed Brahmini. Finally, Brahmini accepts Mrudula as her daughter-in-law.

Mrudula goes to the temple to thank her god for what they have blessed upon her. She tells Madhu about how happy she is, and Madhu joins her in the celebration.

Madhu tells Mrudula that now it is time to spend some time with him and give Brahmini a Junior Mrudula to play with. Mrudula blushes and tells him that she has many things to do before that.

On the day of Brahmini and Krishna Prasad’s wedding anniversary, Brahmini gets garlands for Madhu-Mrudula too. She asks them to exchange and blesses them as a couple.

Prajwala tries to find a way out of the state before Komali changes her mind or melts for her family. That’s when a random boy comes to handover a cheque worth Rs. 10 cr for the house to Prajwala. She tells him to tell his Akka that she can come to stay whenever she wishes to.

The next day, the buyers go to see the house and drool over how amazing it is. The lady tries to call Krishna Prasad but he does not answer the call since Mrudula is around him.

Later that day, Brahmini starts cooking for everyone and Mrudula tries to stop her. But she convinces Mrudula that this is how the new beginning should be. Gaurav and Madhu tell their wives to take the day off and enjoy the feast that they will fix for them.

Brahmini finds out that Rs 3 crores are missing from the bank transaction made to pay all their employees. Mrudula asks her to relax and promises to find out the cause and problem.

Brahmini calls the couples together and tells them that she arranged for a 2-week honeymoon trip for the four of them. However, Mrudula says that she cannot leave her alone and tears the tickets.