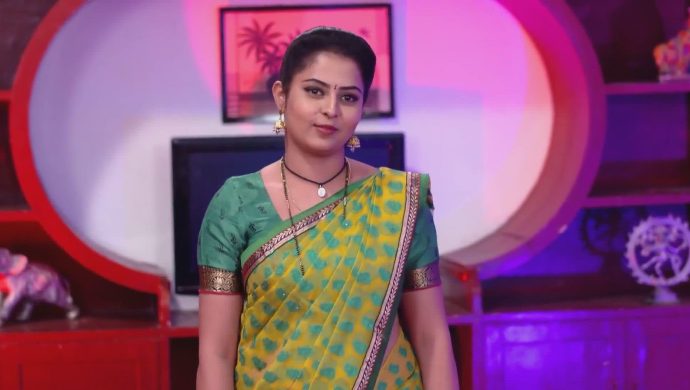 In the week before the last in Ninne Pelladatha, Mrudula and Madhu find a way to marry Mali with her lover. Kanakam tries to stop the wedding, but eventually she gives in and allows it. Brahmini finds out about Krishna Prasad’s relationship with Kanakam and becomes outrageous. She ends up sobbing day and night, before deciding to file for divorce. Instead, Mrudula, Madhu and Mansi convince her into taking some time off and reconsider her decision.

Madhu begs Brahmini to leverage him some time to fetch all the details about Kanakam’s master plan. But Brahmini doesn’t pay any heed to his words and gives half of their wealth to Kanakam.

Also, Brahmini asks Krishna Prasad and Kanakam to leave the house and live on their own. But Krishna Prasad begs Brahmini to not kick him out of her life. Kanakam, on the other hand, tries to drag him away.

Mrudula explains to Mansi and Brahmini that leaving Krishna Prasad with Kanakam would only do more harm than good. She convinces them to move into Kanakam’s house, along with Krishna Prasad. At least in that way, they would have some control.

When they all reach the new house, Kanakam demands Brahmini to welcome her and her husband with Aarti. However, Mrudula takes over the job and reminds Kanakam that the holy fire symbolises how she will burn every evil affecting family down to ashes.

The next day, Kanakam tells Brahmini that she must keep the Gouri vratram along with her for Krishna Prasad. Brahmini is taken aback with Kanakam’s cruelty. But Mrudula manages to show her her place.

Before Brahmini could make any decision regarding the pooja, Kanakam and Hari find a way to burn the bag, full of Brahmini’s clothes. Mrudula finds out what they intended to do and slaps Hari for his work. Later, she also stops Kanakam from doing her pooja.

Madhu goes to Karimnagar and meets the doctor who treated Mali’s parents after the accident. The doctor’s statement proves that Kanakam had nothing to do with their death. But Madhu believes that he is missing something somewhere, and takes leave.

The next day, Mrudula succeeds in completing the rituals and lifting Madhu’s weight on the weighing machine with sweets. Everyone applauds their love for each other. And next, Mrudula insists Kanakam to do the same and prove her love for Krishna Prasad.

When Kanakam seems hesitant, Mrudula goes closer to her and extends her assistance through every single step. Mrudula also claims that she will not let Kanakam skip anything for the pooja.