Mansi's worst dream has come true. Now she has gone one step further than Madhu. But Brahmini has promised to bring Madhu back to Mansi. 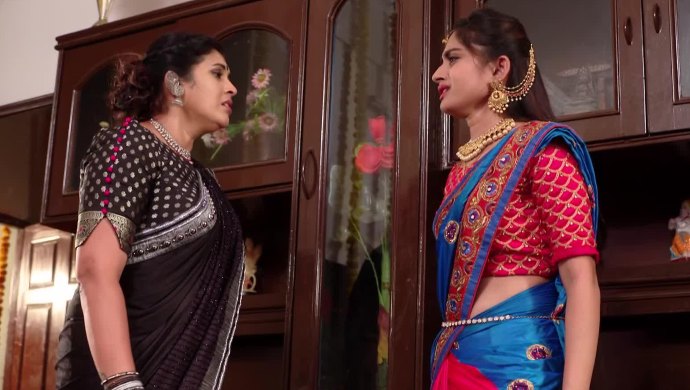 In the Telugu TV show Ninne Pelladatha, we see that Mansi (played by Sree Priya) is finally engaged to the America abbai against her wish. Though Mansi’s love and obsession for Madhu (played by Abhi Prathap) has not reduced one bit. Even now, the only thing she is thinking about is getting back to the man of her dreams. Brahmini has extended her unconditional support to Mansi and Sarayu (played by Sarayu Roy) stands as the sidekick. Read what happens before the engagement day.

You can watch the previous episode here:

Mansi continues to crib about the situations to Brahmini. She also tells Brahmini that she failed in keeping Madhu and Mrudula away since the husband and wife had sneaked out sometime back.

This makes Brahmini angry. She goes to Madhu’s room to check if he had really sneaked out of the house to meet Mrudula. But he pretends to be in deep sleep while Tanaya hides behind the door.

Once Brahmini is certain that Madhu is actually in deep sleep, she leaves. Tanaya then tells Madhu to stop acting and asks him about Mrudula. She realises the love that the two share and encourages them to fight for their love.

On the engagement day, Mansi is busy pacing back and forth in tension. When Sarayu walks into her room, Mansi tells her to do something and save her from the mess. Sarayu starts thinking of a plan.

During the ceremony, Sarayu first adds an obstruction by claiming that the father of Mrudula’s baby had called her. Insensitively, she ruins Mrudula’s reputation when Madhu tells everyone the truth and supports his wife.

Next, Sarayu calls Mansi’s college classmate and asks him to pretend to be Mansi’s lover. He creates a scene and also reveals Mansi’s obsession with Madhu. But Tarun handles him and tells Sarayu to behave.

Watch what happens next here. You can also find more episodes of Attarintlo Akka Chellellu on ZEE5.

Kalyana Vaibhogam Weekly Update: Manga And Swaroopa Are A Step Away From Adoption Process